You are here: Home / Politics / 27 Dead After Clinton Attacks Sanders in Iowa

27 Dead After Clinton Attacks Sanders in Iowa
by Noah Ward

DES MOINES, IA – Earlier today, operatives loyal to rogue presidential candidate Hillary Clinton launched a devastating attack against forces allied with the insurgent Senator Bernie Sanders (I-Vermont). The brutal attacks have unofficially kicked off the beginning of the 2016 fighting season after the traditional holiday truce. Initial reports indicate a high level of sophistication in the coordination of the attacks, leading some local officials to speculate that this had been in the works for some time.

“This should come as no surprise to anyone who has been following the campaign,” veteran Democratic strategist James Carville told Article 107 News. “All the armchair analysts out there spent the last quarter of 2015 building up Sanders to be a serious threat, but the Clintonistas have always had money and experience on their side. Once the younger, more naïve Sanders supporters came down from their mountainous strongholds in New Hampshire to the open lowland terrain of Iowa, they left themselves vulnerable to this kind of attack.” 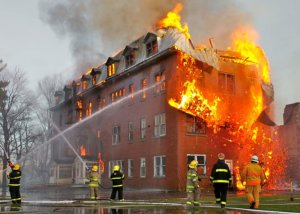 While Clinton-backed terrorists were able to destroy a bank and a school, a militia loyal to Sanders successfully defended the local Chipotle.

There had been speculation as of last week that the pro-Sanders movement, fueled by unemployed college graduates and bolstered by a surprisingly sophisticated social media campaign, would be able to topple the entrenched Clinton loyalists. A confident Sanders had recently cut off peace talks with the embattled Clinton, dashing hopes by moderates for a brokered peace deal.

“We didn’t come to Iowa to compromise,” chief Sanders lieutenant Jeff Weaver had boasted just days before a wave of synchronized suicide bombers shouting “Ready for Hillary!” leveled the Sanders stronghold in Des Moines. Representatives from the Sanders camp refused to confirm whether Weaver had survived the attack, citing concerns that the roving bands of armed, unmarried women still posed an immediate security threat.

Even in the wake of the devastation, those close to the fighting were quick to dismiss optimism that any single attack from either side would prove decisive.

“The conventional wisdom has always been that the advantage in material resources and a cadre of battle-hardened mercenary veterans would prove decisive for Clinton,” said freelance campaign analyst Jamelle Bouie. “The Clintonistas have always dominated the coastal regions and the major urban centers, so conventional wisdom held that her forces would hold those territories and win a war of attrition against the independent tribal areas inclined to support Sanders. I think even if Sanders still has some tricks up his sleeve, that wisdom still holds. Once the pro-Clinton forces were able to cut off the supply of pumpkin spice latte and gluten-free pizza it was only a matter of time.”

Sanders, still defiant and apparently unable to moderate the volume of his voice, released a message on the internet that quickly went viral among his supporters.

“WE ARE GOING TO FIGHT ON UNTIL ALL YOUNG PEOPLE HAVE FREE COLLEGE,” Sanders proclaimed from an undisclosed location that appeared to be some sort of cave or unlit safehouse. “OUR WARRIORS WILL PREVAIL AND BRING WALL STREET TO ITS KNEES WITH SOCIALISM.”

Despite his bombastic statements, sources on the ground confirm that the Clintonistas are rapidly regaining territory in Iowa and are expected to return political control of the entire province to their deposed warlord by the end of the month.

Reports also state that Martin O’Malley, who apparently was also running for president, was one of the casualties of the morning’s attack.

The only real casualty this election is common sense.