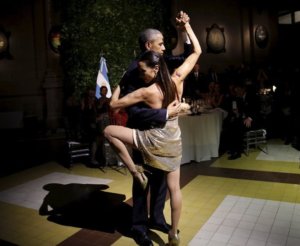 Plot twist: both dancers were male.

WASHINGTON D.C. – The First Family recently returned from a groundbreaking (and budget-busting) trip to Cuba, but controversy followed them home.  That the trip occurred at all was highly problematic, given Cuba’s track record of human rights abuses, Communist political preferences, and state sponsorship of terrorism. Not only did President Obama pose for an official photo in front of a very unfortunate backdrop, he also allows Raul Castro, Cuba’s “president,” to lecture him on human rights and then wave his hand around in the air as if Castro just caught the President’s hand in his pocket. If that wasn’t enough, he was also accused of literally dancing while Belgium burned.

But he did do perhaps the most awkward baseball game “wave” ever, and as any self-respecting Cubs fan knows, that’s completely inexcusable. There’s no way he’s going to be able to live that down in Chicago. And it’s also going to be hard to live down posing for an official photo in front of a giant Che Guevara, a brutal, racist, communist terrorist who is nonetheless somehow a cult hero to the American left.

At only $25 million, the First Family’s trip to Cuba was a true bargain, costing far less than boondoggles to Africa or other exotic destinations. The Obama family also limited themselves to one souvenir each, but even that frugal move was greeted with skepticism from heartless Republicans. “We’re billions in debt, and what does the President do?” Senate Republican and probable party presidential nominee Paul Ryan asked at a press conference on Monday. “I’ll tell you what he does, he spends tens of millions of taxpayer dollars to go down to South America to watch a baseball game with Castro, pose for pictures with Che F’ing Guevara, and dance the tango with a possible tranny. Wait, that last bit happened in Argentina, but you get my point!” There was speculation that Mr. Ryan secretly approved of the groundbreaking trip, he was just miffed the President didn’t bring him back any cigars. 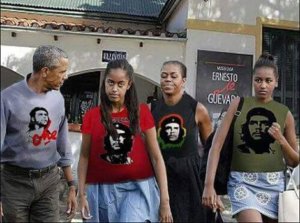 The First Family downplayed their selection of Cuba souvenirs, saying that the bulk purchase of Che t-shirts was “no big deal.”

“We wanted to get a taste for the local culture,” the First Lady explained through her personal press secretary, Nancy Kerrigan. “Every shop we went to had the same thing: coconut rum, prayer candles, and Che Guevara t-shirts. So we bought the thing that would be the least offensive to our political base, and decided to get matching Che Guevara t-shirts for the entire family. I don’t see what the big deal is.”

Hillary Clinton’s political campaign reportedly placed an order yesterday for 100,000 Che t-shirts in what her campaign describes as “having nothing to do with” the President’s trip to Cuba.

It’s pretty amazing what people will unquestioningly believe when they see it on the Internet, especially if it’s about someone they don’t like…