Snyder, who left the project during post-production after the death of his daughter, said “It will be an entirely new thing, and, especially talking to those who have seen the released movie, a new experience apart from that movie,” Snyder said to the Hollywood Reporter about his new version. He has yet to see the 2017 theatrical release, which was overseen by Joss Whedon, writer-director of The Avengers.

The November 2017 Justice League was panned by fans and critics for its dullness and tanked in the box office. Word quickly spread that Snyder’s original cut was darker and more satisfying than what had been released in theaters. An army of fans formed, using the hashtag #ReleaseTheSnyderCut to pressure Warner Bros for Snyder’s footage, with 100,000 fans petitioning within days of its release and, last year, buying a billboard in Times Square.

Few details have leaked regarding Snyder’s cut, but here is what is known:

*Justice League forms to battle their arch-nemesis “Injustice League of Woke America” (ILWA) after the villainous organization infiltrates MSM outlets and Hollywood to propagandize their goal of an “Ununited States of America”. ILWA’s symbol is the Ouroboros (a serpent consuming it’s tail).

*ILWA sows continuous fear and discord among citizens in order to fund their operations and maintain power. This is insidiously accomplished by inverting the intent of the 1960s Civil Rights movement led by MLK. By continuously fomenting outrage and focusing on differences among Americans such: sex, age, race, ethnicity, sexual orientation, gender identity, religion, creed, or national origin the ILWA capitalizes on maintaining chronic outrage and a distracted public, coming close to taking control of the country.

*Justice League battles super-villains such as Crypt Keeper, masquerading as Speaker of the House and Count Comey, a giant half-vampire, who drains his victims through hundreds of fanged, passive-aggressive paper cuts while wearing the skin of the FBI Director.

*SPOILERS: Just when all seems lost, Justice League wins the day with the help of an ally called Silent Majority. Armed with common sense and a focus on content of character rather than the differences perpetually inflamed and harnessed by the ILWA, Silent Majority realizes where the real power is and transforms into Vocal Majority. As Vocal Majority rises, the ILWA, is no longer able to sustain itself through sowing division in others, inevitably turns inward, and destroys itself…the final act of the Oroborous. 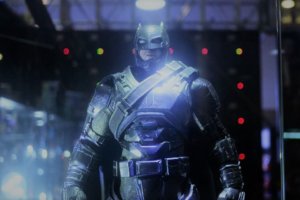