You are here: Home / Military / North Carolina Marine Wins New Jersey Powerball; You Won’t Believe What He Did with the Money!

North Carolina Marine Wins New Jersey Powerball; You Won’t Believe What He Did with the Money!
by Hugh Jashol

CAMP LEJEUNE, NC – Lance Corporal Stanley Durham, a U.S. Marine stationed at Camp Lejeune, North Carolina, hit it big in the New Jersey Powerball lottery last weekend, winning $28.2 million dollars. And you won’t believe what he did with the money.

Well, actually, you probably will. 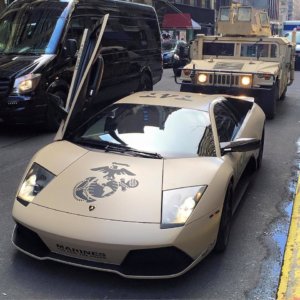 After literally winning the lottery, 20-year-old Lance Corporal Henry Durham accepted the lump sum option, which netted him half of the grand prize. After taxes, getting caught up on child support payments, and paying off the interest –but not the principle!–on his 2008 Dodge Viper (which he bought after his last trip to Iraq, for only 25% interest), Durham was left with exactly $4.2 million in cash. And what did he do with it? Exactly what you’d think.

Article 107 News was granted an exclusive interview with the suddenly-civilian Mr. Durham, who agreed to meet us in the Jacuzzi of his $10,000-a-night room at the swanky Trump Tower Hotel in downtown New York City. “I always play the numbers that correspond with the ages of women I had sex with over the three years I’ve been in the Corps,” the former Lance Corporal explained. He then outlined his reasoning for always selecting the numbers 16, 17, 26, 49, 63. While strange, this technique paid off handsomely for young Mr. Dunham, who summed up his life philosophy as “YOLO, bitches!”

Mr. Durham spent most of the rest of the money on a brand new 2019 Ferrari, which he had re-painted in gold and emblazoned with the Marine Corps’ propaganda emblem, the Eagle, Globe and Anchor. He also ordered a custom license plate that reads “PNTY DRPR.” A set of “truck nutz” dangling from the rear muffler amplify the utter manliness of the vehicle. “Well, we always say that the best ways to get laid are to 1) be a Marine, or 2) drive a Ferrari, so I decided to do both,” Durham offered by way of explanation.

On his last official day in the Marine Corps, Lance Corporal Durham was expected to do maintenance on his military vehicle, an M1151, also known as an “uparmored Hummer.”

“I told them ‘no way am I doing that. The only Hummers I’m into these days are the ones that come on two legs, know what I mean?'” he said, recalling the incident. “So instead of doing (preventive maintenance checks and services) on my M1151, I just signed a statement of charges for that bitch. Best $220,ooo I ever spent!”

“I have my (personal security detail) posse follow me around in an uparmored Hummer, just like we used to do in Fallujah,” he told us in between bong hits in a game of naked Twister. “But now instead it being some random Anbar sheik in the fancy car, it’s me.”

The now-civilian Mr. Durham says he fully expects to be out of money, and trying to re-enlist in the Marine Corps, by the end of the month.

Also, mock everyone who didn’t read the article and thinks we don’t know that the car pictured is a Lambo not a Ferrari. Yes, we know that the car pictured is a Lamborghini not a Ferrari; we did that on purpose. We were just wondering how many people would call us out on that and completely overlook all of the other BS we inserted into this article. “So, you can recognize cars but not satire. Got it. Maybe you should read the article before you start calling people out.”

This photo, and the inspiration for this article, came from the Terminal Lance Facebook page.