You are here: Home / Entertainment / After Surprise Meeting, Trump Names Rapper Kanye West as Secretary for Housing and Urban Development

WASHINGTON D.C. – After the surprise meeting at Trump Tower came the surprise announcement: bad boy and 2020 presidential contender Kanye West has been offered, and has accepted, a position in the Trump Administration. 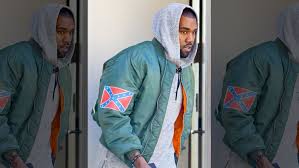 Confederate flag-wavers like Kanye West turned out in droves to support Trump’s candidacy.

While much of the world reacted with shock, the appointment shouldn’t come as much as surprise given how much the two men have in common.  Huge ego? Check. No real political experience, but enormous business acumen?  Totally. Totally hot trophy wife? Yep. Public drama involving Taylor Swift?  Check.  Supported by people sporting the Confederate flag? Check and mate.

The bromance between Trump and West has been brewing for quite a while, with Kanye offering his own brand of political support. “I told y’all I didn’t vote, right? But if I would’ve voted, I would’ve voted for Trump,” he told a stunned crowd at one of his recent concerts.

West further honored Trump by “famously” (see what I did there?) commissioning an art project 12 naked life-size celebrity mannequins–including Trump–in bed with him. Nothing says “I love you bro” like putting one’s naked effigy in bed with the likes of Kim Kardashian, Kaitlin Jenner, and Bill Cosby.

West’s support of Trump hasn’t come without a cost, however.  He has been savaged by the political left, particularly their mouthpiece MTV News, who ominously stated “you know what you did, Kanye” in a video titled “2017 Resolutions for White Guys.”

I had to go check my privilege so I don’t know what exactly MTV thinks Kanye did, except be awesome musically, land a sweet government gig for the next four years.

Kanye’s next album will be called “From the Hood to the HUD” and is expected to drop on or about 20 January, 2017. There’s no word yet about what his reaction to being called out by MTV.