WASHINGTON, D.C. – A few days ago the Air Force announced the retirement of eight-inch floppy disks from the nations ICBM launch control C3 network and the system is known as Strategic Air Command Digital Network (SACDIN). Ironically SAC was deactivated in 1992 during one of the many Air Force identity crises that occur every time a new CSAF is appointed.

Many people seemed stunned that world destruction was loaded on floppy disks, yet nary an eye blinked when it became known that those floppies were being run on IBM Series 1 computers from 1976. But the real stunner is that the machines have a total RAM of 16K. But hey, it’s just global annihilation we’re talking about here.

In a strange twist, a tech supplier for the Russian government made overtures to the DRMO to purchase the surplus disks and any available IBM Series 1 machines. It seemed to be a strange request until an Intel Analyst piped up.

“Well hell, of course they want our gear. Those Russkies run their ICBMs using FORTRAN and punch cards! It takes three days to punch the cards just to order an Uber. When LeMay talked about bombing people back into the stone age it sure wasn’t them, they have never advanced to the stone age.”

Following his rant, the analyst went back to trying to get a stuck floppy out of a drive using a straightened paperclip. (For those younger than 40 that was a valid and approved method)

An inside source told Article 107 News that, “The main impetus for the upgrade was Radio Shack going out of business. We just couldn’t get parts and only the old guys working at those Radio Shacks knew how to fix the equipment. Let’s face it, the current generation can’t fix anything. If it breaks, they throw it away and buy a new one. We had airmen hauling complete SACDIN systems out of the command silos and tossing them in the dumpsters. And we were plain running out of those eight-inch floppies. People kept flinging them like Frisbees or bending them to see if they really were floppy.”

Apparently a large supply of 5-1/4 inch floppies and a shipping container of Tandy computers were discovered in the back room of a Base Education Office, but were quickly discounted as replacements since even a 5-1/4 floppy will suffer at the hands of flexing airmen. 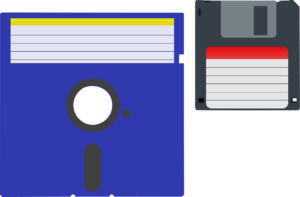 The Air Force Communications and Information Center has issued an RFP for vendors to supply refurbished Windows Vista laptops equipped with 3-1/2” floppy drives. Experts stated that the flex test would not be a concern since this size of floppy has a rigid plastic case and, as a bonus, hold an incredible 1.44 MB of data.

A few test 3-1/2” disks were distributed and airmen were initially ecstatic, until they discovered that Oregon Trail was not loaded on the disks, even though that’s how they were labeled. An unnamed source reported that someone found hundreds of copies at a Goodwill store and sold them to the government for $1.5M.

In related news, China just wrote an i-Phone app to control their whole missile fleet and they have cunningly disguised it to look like Angry Birds.