TAMPA, FL – As reported in today’s Tampa Tribute, the headquarters of the elite Special Operations Command (SOCOM) was evacuated after someone found and reported a suspicious device in the unit’s administrative offices. 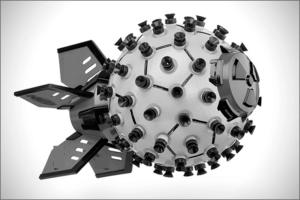 File photo of a Chinese-made “Nuclear Energy Radiological Fallout” device, similar to the one found inside SOCOM earlier today.

“We can confirm that a sharp-eyed individual detected and reported a suspicious-looking device of unknown origin inside the J1 (admin) section of SOCOM,” said Walter White, an employee of Wackenhut Enterprises, the private military company responsible for security at all Special Operations bases around the world.

“After a quick examination of the device, we noticed the universal radiological marking on its nose.  A heck of our files indicated a strong probability that this device was a Nuclear Energy/Radiological Fallout device, likely of foreign manufacture.  At that point, our on-scene security force made the decision to immediately blow the object in place, using all of the weapons that we actually allow our officers to carry.”

A source in the SOCOM J2 (intel) shop, who would only identify herself as “Jenny” because she wasn’t authorized to talk to the press, explained how it went down:  “I went to the J1 office for… reasons… and I saw this device just sitting there on the conference table, looking all explody,” she explained.  “I’d never seen anything like it before.  I’ve been in SOCOM a long time, and I know that the only people you can trust less than the admin office is a CI (counter-intelligence) warrant officer.  Those guys will say ANYTHING to get you to… well, anyway, when I saw that thing I knew I had to say something.  Then, Wackenhut happened, and you know the rest.”

Unfortunately, the flashbangs and Asp batons used by the Wackenhut security team to blow the device in place caused it to go “high order,” showering the office area with rubber and plastic.  The flashbangs also caused a small fire, which triggered an evacuation and set off the sprinkler system, resulting in an estimated $1.8 million dollars in damage to highly-sensitive electronic equipment.  A subsequent sweep by EOD detected no explosive residue or indications of radioactive contamination.

Yes, we know that the picture we used for this story is a Nerf Nuke. That’s why we called it a “Nuclear Energy Radiological Fallout” device (NERF, get it?). Calm down, SOCOM is actually quite secure, and even though the Wackenhut folks have a funny company name (that kind of makes us think of the Port-o-Potties on deployment), we wouldn’t mess with them.