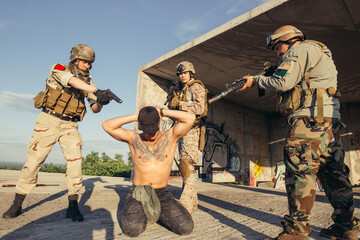 WASHINGTON, D.C. – The Pentagon announced that the contract to provide instructors for the Army’s Survival Evasion Resistance and Escape (SERE) course has been awarded to Silvercorp after the company made a surprisingly strong case for the qualifications of its personnel in the final days of the contest.

“Silvercorp promised uniquely qualified personnel to staff this contract, and frankly I was unsure they would be able to deliver until I turned on the news the other day. Their marketing video looked more like a rich kid burning through his trust fund than anything we typically see from a legitimate business” said COL Chet Manley of USASOC Contracting Command. “But sending two instructors to Venezuela to pressure test their program of instruction really demonstrates the commitment to excellence that we’re looking for in our instructor cadre.”

When asked about the availability of the instructors Silvercorp USA founder Jordan Goudreau admitted: “there are some small details that need to be ironed out specifically the last E part of SERE…and maybe some of the rest of it too, but at Silvercorp our priority is to achieve veritable success for our clients and that’s why we brought in one of the most experienced experts on this topic in recent history: Bowe Bergdahl. We’ve heard some issues of him walking away in the middle of jobs in the past but we’re confident that he’s a good fit for this role.” Editor’s Note: the reporters of this story were told to get a comment from Bergdahl but refused to seek him out on the grounds that “we’ve already wasted enough of our lives trying to find that [unprintable].”

“We’ve updated our tactics to reflect the hybrid nature of the modern battlefield. For instance the former adage for surviving an interrogation was ‘deny everything and make counteraccusations,’ continued Goudreau, “That’s no longer the optimal strategy in this political environment. Instead we’re instructing people to carry as many incriminating documents with them as possible and immediately blame Donald Trump. We’ve found that this drastically reduces the amount of time needed for an interrogation, and at Silvercorp we’re all about efficiency.”

Goudreau elaborated on some of the other specialists on his instructor team: “we brought in O.J. Simpson to teach the Evade block of instruction. He’s known for covering ground quickly, dodging pursuers, and a Ford Bronco is remarkably similar to the Toyota Hiluxes many of our students are familiar with. We’ve also reached out to Jussie Smollett to teach the Escape piece. He’s nationally renown for escaping attackers. Sure they were made up attackers but Donovia is a made up country so it’s a perfect fit.” Editor’s note: I know we’re quoting everything from one guy, but he’s the only person from Silvercorp we found to talk to. It’s almost like this is a one-man shell company…

Initial reports from the first iteration of the Silvercorp SERE course were mixed. “The new blocks of instruction seemed just crazy enough to work and it was good to see The Juice back in action” said a recent graduate who asked to remain anonymous “but the Survive piece needs some work. I was expecting some field skills but it was just us getting waterboarded while Robert Downey Jr.’s character, Staff Sergeant Lincoln Osiris, from Tropic Thunder stood over us repeating “SURVIVE!!!!”