CARACAS, VENEZUELA — A badly botched coup attempt directed at Venezuela’s embattled President Maduro ended in “even worse than Bay of Pigs” style earlier this week when the entire force was captured the moment they entered the country.

It turns out that two of the Americans taken prisoner after the abortive coup attempt were former members of the U.S. Army’s elite Special Forces, troops who are also known as The Green Berets due to their distinctive headgear. This is particularly disappointing news given that the Special Forces’ primary mission is planning, leading, and executing Unconventional Warfare (UW), the exact kind of mission that coup plotters launched to topple Maduro. And not only did this mission totally fail, with the entire force ending up captured, it happened without anyone firing a shot. 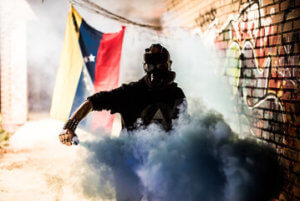 While Special Forces have known for years that their UW skills had all but evaporated during those heady “Direct Action” days of the wars in Iraq, Afghanistan, and Syria, it was unclear until this exact moment how far the elite unit popularized by John Wayne has fallen. Nonetheless, current Green Berets were quick to disavow their failed former colleagues.

“You did everything to make this private war happen,” admonished Colonel Samuel Trautman  of the Army’s famed 5th Special Forces Group, the organization responsible for training the Green Berets. “But you failed. Bro. You’re Green Berets. This is LITERALLY what we train you to do. You.Had.One.Job,” he added, disappointingly.

Has-beens and nobodies from other branches of service were quick to pile on. “If only they would have been SEALs,” said former-SEAL-now-nobody Brandon Waste, whose only life accomplishment was one tour on a stateside SEAL team before getting tossed on drug charges. “They would have murdered everyone and written three books about it by now.”

As a result of their spectacular and world-renowned failure, the Greet Berets involved in the failed coup have had their Special Forces tabs revoked, and after serving their sentences in Venezuela, they will be ordered back to active duty to repeat the Special Forces Qualification Course… even though they will probably be over 80 years old by then.

And they’ll probably need to repeat SERE training too…

Article 107 of the military’s Uniform Code of Military Justice covers “False Official Statements.” As our name implies, we are a satirical site, and you shouldn’t think anything we publish is real. You should, however, mercilessly mock anyone who does. You should also mock the two idiots who tried to kick off their own private war… but only after they return safely to the U.S.  Because yeah, I sure wouldn’t want to be those clowns right now….

And yes, I’m sure 5th Group was just as surprised as everyone else was to read this and learn that they were now in charge of “Green Beret Training.”  Sorry, SWCS, you should have done better with Denman  and Berry… and probably Goudreau too.