NEW YORK, NY – Citizens across the nation were outraged to learn that the military hospital ships USNS Mercy and USNS Comfort, deployed by President Trump to San Francisco and New York City respectively in support of COVID19 relief, contained only Motrin, extra socks, and pallets of water in its medical stores.

“As part of the President’s plan for COVID relief, we were expecting more from the USNS Comfort. Things like stretchers, ventilators, saline solution, maybe some random vaccinations or some Performing Arts Center funding… you know, something useful,” said New York City Mayor Bill DeBlasio. “Instead, as is typical of this administration, they tried to put the health of citizens of New York and San Francisco on the same level as mere military service members. That’s unacceptable.”

But the military pushed back. “Over time, we’ve discovered that there’s nothing that can’t be fixed with Motrin, a change of socks, and proper hydration,” explained Surgeon General of the Army General Marc Wheeler. “You usually need to take a knee and face out during the recovery process, but civilians aren’t usually trained and equipped to perform this much physical activity, so we’ve waived it for the duration of the Corona crisis.”

“If everyone would have been wearing their reflective belts, COVID never would have happened in the first place,” he added.

While the political leaders of the deep-blue cities of New York and San Francisco took cheap shots at the President’s response, their constituents preferred to take a “glass-half-full” approach.

“We might just be getting Motrin, fresh water, and clean socks from the military, but at least they’re not trying to make everyone go through the Veterans Administration health system,” said one New York resident. “I mean, the VA system is even more fatal than corona!” 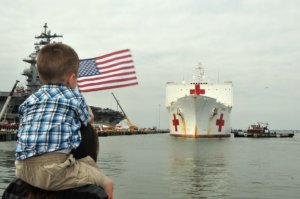 The USNS Comfort docks in New York harbor, while disappointed onlookers maintain their social distance from the hospital ship.

We salute the men and women in and out of uniform who put themselves in harms’ way to protect the rest of us.  THANK YOU.  Stay safe… and drink water.