You are here: Home / Entertainment / F-35D Variant Eyed as Replacement for A-10 Warthog

His 256-minute speech, which oddly included items from a Chinese takeout menu, noted a number of key points.

“This whole business of getting rid of “that” airplane has cost us too much already. I, especially, paid in way of a good caddy and Exec. You all have no clue as to how hard it is to find a good caddy. Execs are a dime-a-dozen since everyone wants to make General, but without a good caddy you’ll never make par on the Langley courses.”

After a long discussion on the pros and cons of different species of grass for putting greens he moved back to the A-10 replacement.

“We know that the ground sometimes needs to be attacked. And the A-10 was good at attacking ground stuff, but boy is it ugly! You know, we can’t have ugly things in the Air Force. I mean, why do you think we’ve been pushing PT and appearance so hard? ‘Look Good, Fight Good’ is going to be our new motto. Fat guys who don’t fly fighters don’t get chicks! Am I right?”

The crowd let out a low murmur of appreciation. We are still unsure whether the applause was due to the General’s statement or his new Caddy tapping his watch, indicating time was short.

“So anyway, as a concession to the whiners down in the mud we are going to fast-track a “D” model variant of the F-35. It will not look anything like the A/B/C models. It will have a low wing with little sweep and with multiple pylons for external stores. The tail will still use dual vertical stabilizers but they will be mounted outboard on an integral horizontal stabilizer with elevators at the trailing edge. Instead of a single supersonic engine it will use dual subsonic engines mounted externally on the fuselage. And another exciting thing is that we are upping the size of the gun to 30 mm and placing it in the nose!” 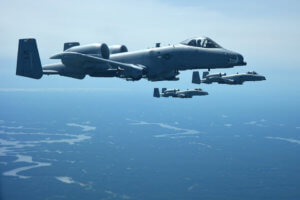