(Minneapolis, MN)  Minneapolis Mayor Jacob Frey announced today that while rioting, looting, arson, and murder would be allowed to continue unchecked in his city, local government was drawing a line over COVID-19

“I know just last week that liberal mayors across the country were threatening to throw business owners in jail for breaking our COVID-related edicts,” Frey said in an interview with Article 107 News.  “But the fact of the matter is, small business owners don’t riot. They don’t attack police, they don’t burn buildings, they don’t completely loot and destroy every viable business in their neighborhoods. So we’re not scared of them; we’ll do whatever we want to business owners.  But the people on the street right now? Yeah… we’re terrified… .” 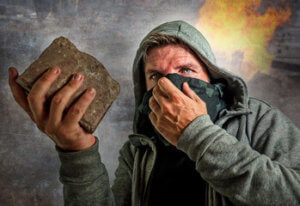 But if there is one thing that politicians fear more than a violent mob, it’s looking weak in an election year, so Mayor Frey had to draw the line somewhere. “Look, we’re going to let you riot, loot, and destroy to your heart’s content,” he pleaded, “just please, limit yourselves to 25 or fewer looters at any one store at any one time, to make it look like we’ve still got some semblance of control.”

No, Mayor Frey didn’t really say any of this. But he might as well have.