WASHINGTON, D.C. — Yesterday, authorities arrested Mr. Biggles, who was charged with masterminding the “Defund the Police” initiative as part of an elaborate plan to install an adorable fascist regime in the United States. According to FBI Deputy Director Bill Drayton, Mr. Biggles waged a “plush, snuggly and sophisticated psychological operation campaign” against America for over a decade. His path to power was made easier through bipartisan corporatism of the American political system, which benefited from the distraction and resulting civil strife fomented by Biggles’ funding of a steady stream of deliberately inflammatory and divisive MSM propaganda. With the population further “stuffed and softened” from COVID, the cuddly would-be dictator determined it was time to strike at his last impediment to power: law enforcement.

Mr. Biggles meticulously planned the furry coup from his secret lair in the basement of a Build-A-Bear Work shop in Washington, D.C. From there, he covertly developed a near-perfect weapon system called “white privilege”.

When fired, “white privilege” projectiles are effective against both light-colored and dark-colored targets. When striking lighter shades, “white privilege” is designed to incapacitate, first by creating and then exploiting feelings of helplessness, guilt, and self-loathing, while fabricating anger, outrage and “justified violence” in darker-shaded targets.

Furthermore, “white privilege” rounds also shield the attacker from any form of return fire by also employing laser designators that tag targets as either “racist” or “misguided”, depending on their shade. Media, celebrity, political and corporate endorsements enhance the weapon system’s efficacy as do attempts at apology or self-censorship for fabricated “offenses”. Likewise, ballistics experts have determined that any acknowledgment of “white privilege”, whether positive or negative, merely exacerbates the weapon’s destructive power.

“Mr. Biggles brilliantly exploited the feel-good mantle of self-righteousness and victimhood,” said Drayton. “His plan was to make increasingly ridiculous demands in order to extract more and more concessions to create conditions increasingly favorable to his totally huggable regime.”

Wrapped in cuddly righteousness, Mr. Biggles compelled submission by posing as a “Teaching Tolerance” bear designed to “facilitate the use of white privilege in a way that is beneficial to all people by suppressing ‘counterproductive’ feelings of discomfort, guilt or defensiveness.” The fuzzy former despot disabled light-colored targets by insisting they squeeze him to “remind” the “white” holder: “Don’t take it personally or use discomfort as an excuse to disengage…Rather than centering your own feelings of discomfort, center the feelings of people of color in evaluating what to do with this information. If your instinct is telling you it’s more comfortable to retreat or reassure yourself that you are not racist, think instead, What actions can I take to help?“

According to Drayton, Mr. Biggles represented the “gravest fascist existential threat” to the country since World War II.

Mr. Biggles is currently sitting on a shelf, alone with no other toys to play with. 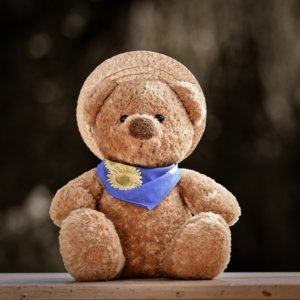