MINNEAPOLIS, MN – Pro-police demonstrations highlighting law enforcement’s vital role in society took place throughout Minneapolis Wednesday night as city police responded to stores being looted and burned as well as a deadly shooting at a law enforcement support demonstration. Video posted on social media, including Twitter, showed burning businesses and looters entering a local Target store and making their way out with bags full of items.

In a show of solidarity, police supporters in Los Angeles blocked traffic on Highway 101, clung to a California Highway Patrol cruiser and burned an American flag during a downtown demonstration Wednesday.

“We know police officers put their lives on the line every day to keep the public safe,” said one demonstrator, wearing a ski mask and brandishing a bat. “They really don’t get enough credit for what they do,” he added just before smashing a car windshield.

Another law enforcement activist, with several bags of Target merchandise slung over his shoulder, told Article 107 News, “Cops make 10 million arrests a year and we’re all out here tonight to show our support and remind folks what life would be like without them.” 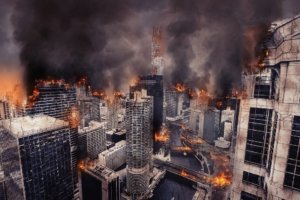 Demonstrators across the country say: “It’s time to end the Demonizing of Police”