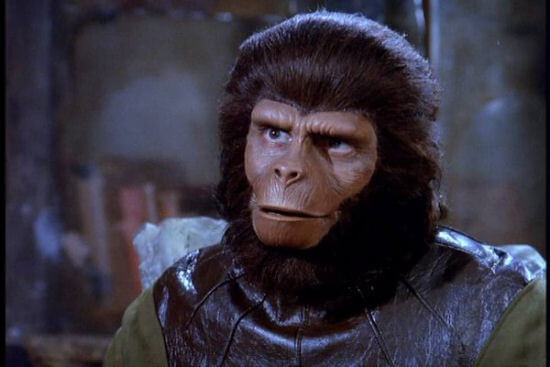 APE CITY – Officials with the Ministry of Science are embroiled in controversy after a small Chimanzee child entered a human exhibit at the Ape City Zoo, resulting in a soldier from the Simian Army shooting and killing a human that, by some witness accounts, appeared to be trying to protect the child.

The child, whose name has not been released for privacy reasons, was at the zoological park with his mother when he somehow entered the human exhibit. A male human, known to researchers at the facility as “Bright Eyes” approached the chimpanzee boy to the horror of those gathered.

The human, a savage believed to have been captured on the outskirts of the Forbidden Zone in 3979, appeared to be mimicking speech sounds and patterns. Some witnesses on the scene reported the human appeared to be actually speaking, as ridiculous as that sounds. A spokesape for the Minister of Science, Doctor Zaius, reiterated that man is an unintelligent creature incapable of speech, however, the species has been prone to often uncanny mimicking.

Although some conspiracy theorists have suggested men can, under the right circumstances, be capable of speech, these “theories” are generally dismissed as the apes pushing this type of junk science have also been known to suggest that intelligent humans once ruled over apes and that the Forbidden Zone was once a lush paradise.

Fearing for the safety of the child, a soldier from the Simian Army killed “Bright Eyes” with a single shot from his rifle.

Protesters, mostly chimpanzees, gathered in Ape City to voice their opposition to what they described as a “senseless slaying of a noble creature.” Many carried signs bearing the hashtag #JusticeForBrightEyes, which has gone viral in social media since the killing.

One protester, whose husband refused to allow to give her name for fear of retribution, told Article 107 News, “This idea that a majestic human life is snuffed out simply because ignorant gorillas who don’t understand their nature is nauseating. That human was being a better parent to that child than the mother!”

While there are no definitive numbers regarding how many wild humans still survive in the wild, there are an estimated 435 in captivity.

This is not the first time Bright Eyes has been in the news. In 3979, shortly after he was captured, the human escaped a laboratory research facility and ran loose through downtown Ape City, even finding his way into the museum. Bright Eyes was captured by Simian Army soldiers who deployed a non-lethal net similar to the ones used to capture humans in the wilderness.

Article 107 of the military’s Uniform Code of Military Justice covers “False Official Statements.” As our name implies, we are a satire site, and you shouldn’t think anything we publish is real. You should, however, mercilessly mock anyone who does. You can follow Article 107 News on Twitter at @Article107News. If you’re looking for real news, check out our sister site The Havok Journal. Or you can follow us on Twitter at @HavokJournal

Paul J. O’Leary is an Army veteran and writer at Article 107 News and Havok Journal. In addition to being a professional class clown, he is responsible for a number of practical jokes gone horribly wrong. You can follow him on Twitter at @pauljoleary.