WASHINGTON D.C. – Most people are aware of the surprise visit the CinC made to Bagram Air Base, Afghanistan to spend Thanksgiving with the troops and the positive impact it made on morale with the troops currently deployed there. The media were taken somewhat by surprise as the White House played an excellent game of bait-and-switch by leaving Air Force One on the ramp at Palm Beach Florida’s International Airport while boarding another aircraft bound for Joint Base Andrews (JBA). From JBA the CinC boarded the other AF One and boogied on out to Bagram.

But the real subterfuge happened with the Air Force One that was left at the Palm Beach airport. Most people believed that it just returned deadhead back to JBA, but little did they know that the President had decided to give the troops a real treat and not just him dishing out turkey in the Bagram DFAC.

The Palm Beach aircraft landed at Bagram shortly after the President departed heading back to D.C. and it was loaded to the gills with real morale boosters, because Trump, probably more than any other recent President is really in touch with the troops. 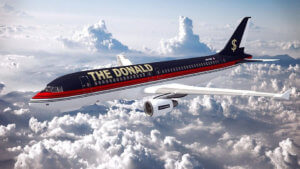 Although there was no official cargo manifest, Article 107 News was provided a basic list by an aerial port troop, under the condition of anonymity.

1. Approximately 2,000 cases of beer of various brands, although there was no Coors Light, much to the disappointment of some Admin personnel.

5. One pallet of Cuban cigars (courtesy of the CIA).

7. One pallet of assorted sex toys for females and personal lubricant.

9. Ivanka – who graciously volunteered to stay for two weeks and personally tuck each person into bed at night at least once.

The sentiment being reported over and over is, “Best President ever and best deployment ever!” Reportedly, U.S. military reenlistments have skyrocketted.