WASHINGTON, D.C. – President Trump announced last week (pictured below) that he was sending troops back to the Middle East and many were going to bases they had abandoned only weeks before. Now the civilian population may have found this whole turn of events ludicrous, but those who have spent any time in the military just shrugged their collective shoulders and wrote it off as business as usual.

But there was a larger mix-up ocurring at the same time that shocked even the most jaded of lifers. At the same time that the Commander in Chief was deploying troops back to the Middle East, a DoD historian was archiving a stack of old maps from previous wars and left some out on the table while he went to lunch. The President saw the maps and decided military personnel should be deployed to those hotspots as well. Consequently, units from all branches received movement orders to “atypical” locations.

One Army Air Cav unit found itself landing in a field adjacent to Fort Laramie, Wyoming.

A Marine unit convoyed through France to the Marne River and encamped in Belleau Wood.

An Air Force B-52 squadron briefly orbited Framlingham in the United Kingdom before realizing that there was no longer any airfield there and diverted to RAF Mildenhall.

Ships of a U.S. Navy task force cruised to a location just off Iwo Jima and had orders to bombard the island.

And the list went on and on and very few people were left in CONUS. Military personnel deployed to locations all over the globe. The 94th Fighter Squadron ended up in France at a location that has been identified as the Foucaucourt Aerodrome. An Army Battalion got to see Montecasino in Italy up close and personal.

The biggest challenge came when President Trump started demanding action reports which caused deployed commanders to panic. But as expected, enemy KIA numbers started rolling in along with sortie rates and expended munitions reports. By all accounts the U.S. military dominated and crushed the enemy wherever he was met and victory parades are planned in Washington D.C. for late October 2020.

DoD historian’s desk pictured below. Troops were deployed to at least 17 historical battefields across North America, Europe and Asia. 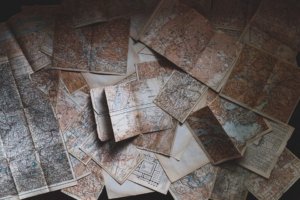