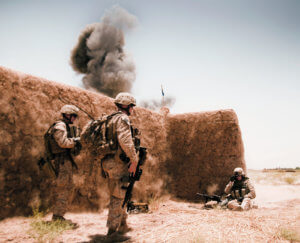 These three are the only survivors from their platoon.

Sources at the Twenty Nine Palms Marine Corps Air Ground Combat Center confirm that 3/23 Marines, a reserve battalion from the Midwest, suffered a nearly 60% attrition rate during the month-long Mojave Viper Combined Arms Exercise. The reservists, the majority of whom are police officers from Louisiana, Arkansas and Georgia, excelled at detainee operations and breaking down doors during mock raids in urban environments. However, sources speaking on condition of anonymity say the unit had difficulty in fratricide prevention during the mortar and artilleryfield exercises.

Prior to the beginning of the exercise, 3/23 Battalion Commander Lieutenant Colonel Matthew Markinson was overheard asking his Executive Officer how his battalion would perform. The officer’s response was “Sir, in my professional assessment the Marines are good to go. One hundred percent prepared, no question about it.” Concurring with an “Errr” was the Battalion Sergeant Major.

On the second day of Mojave Viper the battalion lost thirteen Marines in the worst single casualty incident of the exercise. A squad of the reservists conducting patrolling exercises on Range 210 walked directly into the gun line of a pair of Cobra attack helicopters, killing everyone except 1st Lieutenant Philip Fry. The lieutenant had fallen behind when he stopped and attempted to find the squelch button on his MBITR radio.

A week later an entire platoon from Echo Company was admitted to Robert Bush Naval Hospital suffering from heat casualties. They had replaced the water in their Camelbaks with sugar-free Monster energy drink. The Louisiana reservists, unfamiliar with the Southern California desert heat, bought ten cases of the energy drink to keep the unit awake and alert waiting before crossing the line of departure for the battalion’s run through the Deliberate Assault Course. 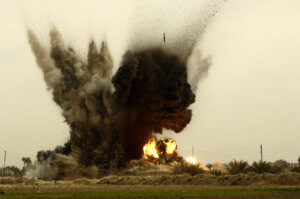 A call for fire destroyed the battalion HQ on the last day of the exercise.

Over the course of the rest of the exercise there was a continuous stream of negligent discharges, friendly fire incidents and vehicle accidents. An EOD unit conducted a controlled detonation within its designated area, which was also within ten meters of a sniper team, severely concussing all four. In the worst vehicle accident an M1 Abrams Main Battle Tank backed over an SUV full of civilian contractors. The contractors, however, are not counted against the battalion’s casualty rating.

Privately contractor  Mercy Air has been continuously making runs to the hospital but the high demand for medical evacuations has overwhelmed the single rotor helicopter used by the company. Consequently, the House Coyotes called back to the Expeditionary Air Field and requested tasking for two CH46s to pick up the slack and get as many of the reservists to medical attention as soon as possible.

With the successful completion of Mojave Viper, 3/23 has received its pre-deployment certification and will deploy to Helmand Province, Afghanistan in the coming months.