You are here: Home / Politics / Bernie Sanders: The Only Thing to Sell Out Faster Than Toilet Paper During COVID-19

Bernie Sanders: The Only Thing to Sell Out Faster Than Toilet Paper During COVID-19
by Hugh Jashol

WASHINGTON, D.C. — Lots of things sold out at a record-breaking pace during the panic over the 2020 Chinese coronavirus, including hand sanitizer, fresh meat, and, of course, toilet paper. But nothing sold out faster during COVID-19 than… Bernie Sanders.

With the tears barely dry on his concession speech, former Democratic primary frontrunner Bernie Sanders offered his endorsement of longtime party insider Joe Biden. The move outraged most of Sanders’ supporters, who saw Bernie as the anti-establishment candidate that could finally bring about the socialist utopia they inexplicably longed for. But according to some people in the Democratic Party leadership, a Sanders sell-out was a foregone conclusion. 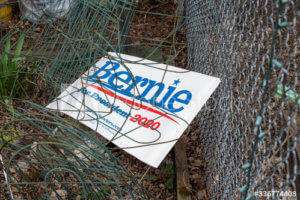 “I know people are upset that they’re not going to be getting all of the free shit Bernie promised them, but they should have known there was no way we were going to let him win the Democratic nomination,” cackled Democratic Party luminary and failed presidential candidate Hillary Clinton. “We stole the election from him outright in 2016, and in 2020, we’d rather have a senile, hair-sniffling, leg-hair-petting empty suit than someone who connects with young voters in a deep and meaningful way.”

“It’s not like we’re going to win in 2020 anyway,” admitted a bedraggled Nancy Pelosi. “But at least we can keep the young, left wing of our party, as personified by Bernie, angry and disenfranchised for another four years.”