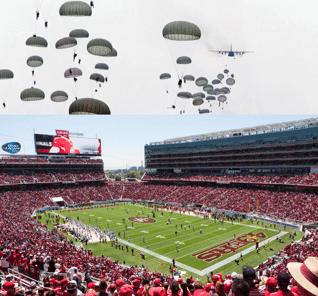 After last-minute authorization from the Secretary of Defense, the 75th Ranger Regiment has officially been given the green light to conduct a “mass tactical” airfield seizure (also known as a mass tac) demonstration during this year’s halftime show.

Adding to the excitement, and since the they didn’t have anything else to do during this year’s Super Bowl, the entire New England Patriots cheerleading squad is set to participate in the first-ever deliberate mass static line “tandem jump” with a platoon from Bravo Company. Halftime entertainers Shakira and J-Lo are also expected to jump in with the Rangers.

While the Rangers are overjoyed at the prospect of landing an entire Regiment of 10,000 paratroopers in a constrained urban landing zone of 110m x 50m in front of millions of worldwide viewers, it almost didn’t happen.

“I have to admit, it was a little daunting at first,” said Captain Dax Hamilton, a 2003 graduate of Mercer University‘s Reserve Officer Training Corps (ROTC) program and former captain of their award-winning football team. “I mean look, the risk assessment alone was over 1100 pages. But we just got this new (signal corps lieutenant) in, and it turns out that the Officers’ Basic Courses these days are really, really good at churning out officers who are highly competent at blowing through mindless paperwork. He got it done in record time!”

Even with all of the mitigation, which includes numerous pre-game day rehearsals and the consumption of copious amounts of nerve-calming alcohol immediately before the drop (generously donated by perennial Super Bowl favorite Budweiser), questions remain about both the wisdom of the idea in general, and the safety of its participants.  Captain Hamilton insists it’s a brilliant idea, and totally safe. “The Air Force and the Navy always get to do the flyover, and the Marines dominate the Super Bowl advertisements with their ads where they slay dragons and shit. For this, the first post-impeachment Superbowl, President Trump wanted us to do something bigly. Something that the people will remember.  Well, no one forgets watching their first mass tac.  It’s going to be a blood bath. Safety and common sense be damned.”

And about safety? “Well, I mean it’s still more dangerous than the 173rd’s “combat jump” in Iraq in 2003,” he conceded, ensuring to emphasize the air quotes around the words “combat jump.”  “We’ll just have them all wear reflective belts, and if they get hurt will issue them clean socks and Motrin. That’s pretty much the Army’s solution for everything anyway.”

Article 107 of the military’s Uniform Code of Military Justice covers “False Official Statements.” As our name implies, we are a satirical site, and you shouldn’t think anything we publish is real. You should, however, mercilessly mock anyone who does, especially sites that Snopes that feel it necessary to brand us as “fake news” despite a very clear disclaimer, like this one, on literally every one of our articles. You can follow Article 107 News on Twitter at @Article107News.  If you’re looking for real news, check out our sister site The Havok Journal. Or you can follow us on Twitter at @HavokJournal.

A “mass tac” airborne operation over an urban area that includes a football stadium is always a complete disaster… except in the opening scenes of Red Dawn. God I loved that movie.