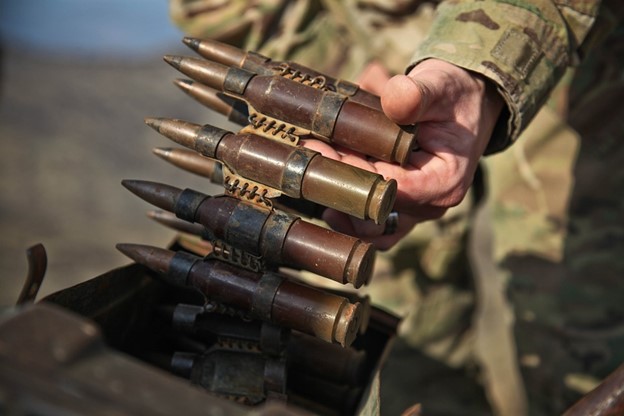 WASHINGTON, D.C. — The collapse of Afghanistan has had a ripple effect throughout the DoD and one of those ripples just reached SFC Blevin Gherkins who is currently assigned in the logistics section responsible for all the military equipment issued to the Afghan military. I just happened to see him softly crying with his head in his hands at a local Dunkin Donuts. I asked him what was wrong, and the gist of what he said follows. (Quotation marks and my questions not included for readability)

“You know all that gear we sent to The Sandbox? Well, I’m the guy who was given custodial responsibility for that stuff. And you wanna know how much stuff that is?”

“And do you know what I have to do with all of that gear since it’s now lost? I have to account for every single loss, by item, using the Financial Liability Investigation of Property Loss (FLIPL) procedure the Army to account for the cost of lost property. And Army Regulation 735-5 requires me to do that. Normally it would be the individual soldier who had to do the paperwork but I don’t think we can get the Taliban to cooperate. Maybe a few will. The DD Form 362 is the admission of liability for the lost or damaged property and an agreement to pay for it so hopefully, some of them will be cooperative. But the Army uses FLIPLs in situations where responsibility for the loss is in question, or where the amount to be charged is in dispute. And that’s me.”

On average, the Logistics Readiness Center, or LRC, sees 29 FLIPLs a year through the Central Issue Facility. Last year, the LRC handled 17, with a total value of $85,000. I guess you could say that number has increased exponentially for 2021. (More sobbing followed by a 10,000-yard stare)

The FLIPL procedure begins when an appointing authority, usually a battalion commander, receives a DD200, or FLIPL form for loss or damage to Army property. He or she reviews the document to determine if there needs to be an investigation or if the cause of the loss is apparent. If an investigation is required, a financial liability officer, or FLO, is appointed. The FLO determines if negligence is involved, who caused the property loss, and the amount of the loss.

“And do you want to know what all those Battalion commanders FLOs, and approving authorities are doing? Nothing! They dumped every single one of them on my desk and told me to handle it!”

“Listen, I was a good Soldier. Never did anything wrong in my nine years. I mean I’m nearly halfway to retirement and they say I can’t put in for a new assignment until I get this done. And they won’t give me any people to help. I am a one-man shop. That means I have the next eleven years to be sitting in front of a computer screen.”

At this point, Sergeant Gherkins pulled some pills out of his pocket and downed them with a 12 donut chaser. I didn’t think it was an appropriate time to thank him for his service, so I just paid his bill and walked out.