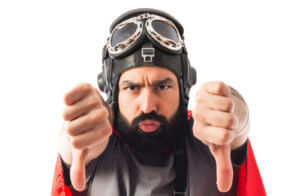 “At least it’s not an Army flyover.”

Bodenheimer flies as Left Wing Pilot and is currently in his first season with the Thunderbirds.   When he’s not gallivanting around the world wasting taxpayer dollars, he calls Colorado home.  Bodenheimer grew up in Colorado Springs, Colorado and later attend the University of Boulder.

“Flying for the Thunderbirds has always been my dream, but so has cheering on my beloved Broncos.  Hence you can understand why I’m so crushed.  Dude, I tell you what – first I didn’t get F-22s in pilot training (editor’s note:  this is reportedly because Bodenheimer’s Flight Commander was jealous that Smoker was the better pilot) and now, I have to watch a bunch of Squids fly this year’s Super Bowl flyover.  My life sucks.”

A Super Bowl official who requested to remain anonymous, noting that he was not permitted to speak on the record, stated “The reason we selected the Blue Angels was simple, really.  The Thunderbirds are such prima donnas.  We need men we can count on to get the mission done, not a bunch of people complaining about crew rest, air conditioning, flight pay… you name it.  Pretty-boys.”

In a rare public relations blunder, NFL Commissionaire Roger Goodell was overheard saying that “the Thunderbird’s whine more than the NFL Players Association; what a bunch of [garbled speech].”

You should also cheer for Carolina in the Superbowl. I mean, we all already know they’re going to win anyway.