From the destruction of the Spanish Armada in 1588, to Washington’s retreat from Long Island in 1776, the weather has played a critical role throughout the history of armed conflict. Battles, and sometimes even ultimately wars, have had outcomes that were greatly impacted by the weather. Generals and military planners have long sought to know the predicted weather to give the best possible conditions to aid in any given operation. In WWII the U.S. Army Air Force relied heavily on forecast weather to determine which targets to attack in Europe, which has a climate that is extremely variable and quickly changing. Weather Groups were formed and meteorologists became an integral part of U.S. combat operations.

As weather science advanced, the DoD embraced all the modern technologies and even launched their own dedicated weather satellites. But even these efforts fell short and senior leadership sought to find even more accurate ways to predict future weather conditions.

In January 2018, a Think Tank was formed to investigate possible new technologies for combat weather prediction. The group utilized the brightest minds in the Pentagon, comprising Flag Officers and senior Civil Service personnel. After much head-scratching and consumption of alcohol the team had not arrived at even a single viable possibility. Then one of the august members happened to be watching the news on February 2nd and saw the ceremonies surrounding the famous groundhog Punxsutawney Phil and realized that he had stumbled on an untapped weather prediction gold mine. He reported his discovery to the Think Tank and the giant machine of the DoD churned into action.

Planners discounted the idea of purchasing or kidnapping the famous groundhog but knew they needed the capabilities of the animal. As a result the 1st Veterinarian Special Operations Group was formed. For months this elite group trained for the critical mission they had been assigned.

Finally S-Day arrived and at Oh-Dark-Thirty on April 1st the team infiltrated the pen of Punxsutawney Phil and successfully extracted approximately 250 mL of semen from Phil. The material was airlifted to a U.S. Army biological facility to form the basis of a breeding program.

The DoD is hoping this new weather predicting weapons system will give the United States an unparalleled advantage in future conflicts.

In related news, the owner of Punxsutawney Phil noted that in the days following April 1st, Phil seemed to me much more happy and relaxed than normal. 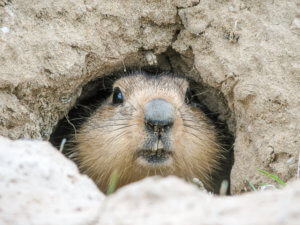 Punxsutawney Phil has given much for his country…and is spent.