You are here: Home / Military / Special Operations Command To Open Massive New Library Featuring Nothing But Books By SEALs

MACDILL AFB, FL – In one of his last official acts as commander of the Special Operations Command, outgoing commander General Joseph Votel presided over a ribbon-cutting ceremony to officially open a massive new library, unofficially known by the acronym “DMML,” to hold only books written by current and former SEALs. 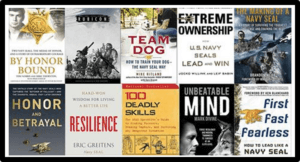 This week’s new additions to the Dick Marchinko Memorial Library.  We were told that this was a “slow week” for new SEAL books.

With ten or more books being written a week by current and former SEALs, the SOCOM library, which reportedly contains one copy of every book ever written by a member of the Special Operations Community, simply can’t keep up with the volume.

“At first we simply started stacking SEAL books in the section designated for the Rangers, because there are only like two of those,” explained Arlene Arglebottom, a rather surly civilian worker in SOCOM’s J1 (personnel) section. “But it quickly became apparent that wasn’t going to cut it. Since we are Congressionally mandated to read and retain a copy of every book written by a member of the Special Operations community, we had to hire ten new staff members and open an entirely new library.”

In his remarks during the christening of the Dick Marchinko Memorial Library (DMML), General Votel shared these words:

“It is my pleasure to name this new library after the man who started it all, Mr. Dick Marchinko. Mr. Marchinko showed the way to cash in on his status as a SEAL, and proved convincingly that there are zero consequences for completely selling out for a buck and/or completely disregarding OPSEC and any and all non-disclosure agreements. I want to personally thank Mr. Marchinko and all of the like-minded SEALs that came after him for literally telling everything even remotely related to being a SEAL, and for putting every mission any SEAL ever went on into print for the American public and every enemy we’ve got. I want to thank all of them for making my life as the commander of SOCOM so much more…interesting.”

The new library reportedly contains a small holding of books written by SEALs who did the right thing by requesting, and receiving, pre-publication clearance for their books. But if such a holding exists, it was small enough to evade our notice during a tour of the facilities.

Over beers at the MacDill Officers’ Club with the Article 107 News team, General Votel denied that the reason for his rather perplexing move from the commander of SOCOM, which oversees the world’s most elite combat forces, to the commander of CENTCOM, the conventional combatant command with the world’s shittiest geography, was driven by a desire to “get the hell away from those damn SEALs.”

Interestingly, but perhaps unsurprisingly, at press time it appears not a single SEAL author donated a penny to the new SOCOM library, or, as it turns out, to any veteran charity that they didn’t personally own.