You are here: Home / Military / Army in Crisis: “We Fired Everyone Who Knew How To Do PowerPoint”

Army in Crisis: “We Fired Everyone Who Knew How To Do PowerPoint”
by Hugh Jashol

WASHINGTON D.C. – In the realm of unintended consequences, the Army is facing a challenge entirely of its own failure to see past the short term objective. As part of Sequestration, the Army has targeted fully-qualified Captains and Majors for separation. This was seen as a reduction based on future force projections and the new brigade organization concept models. 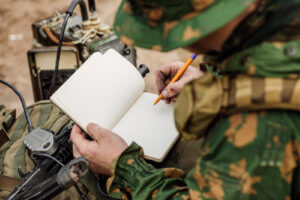 “This was a lot easier back when we had PowerPoint…”

The unforeseen problems have been slowly accruing over the last two quarters and are expected to become drastic in the next year. There are already talks of recalling some of those separated individuals but given that they were unhappy to be sent to the streets, they might be less than thrilled to be recalled.

Napoleon said that an army traveled on its stomach. He made it part of his goals to obtain better more potable and portable food. The modern army replaced that standard by trading the necessity of food, for paperwork. The U.S. Army up to the 21st Century traveled on a sea of paperwork.

But the change in the millennium changed the paradigm yet again. Instead of paperwork, the military has transitioned into the digital age in all its glory, instead of paper, they travel by PowerPoint. Famous Generals have noted that PowerPoint was a major focus in understanding the future of combat actions.

The problem, removing all those officers removed the only people who know how to make Power Points properly. The trend is being seen at lower levels at the moment but reports on Power Points are percolating upward and the results are unpleasantly received.

LTC (Name withheld) commented, “The General was looking at this slide from one of the battalions. The color scheme did not match the Division Standard, there were no animation transitions, and they used Comic Sans for Christ sake! The General could not understand the slide without the proper color code and he blew his stack.”

G-3 SGM Estrangelo Edessa said, “The General got that fuchsia color on his face. I checked the PowerPoint, but I lost the two CPTs in my shop that normally dressed that stuff up. Now I had to take a heat round because I could not tell the difference between golden rod and yellow umber. I put in my retirement packet after that meeting. Screw this. WTF is golden rod anyway?”

Sources tell us that we may have seen the beginning of an Army revolt or revolution. With PowerPoint driving the way the Army thinks and does business, either we are going to see a recall of those skilled manipulators of color and font or enlisted soldiers are going to have to figure out how to use it.

Only time will tell.

First it was people with tattoos, now it’s people who know PowerPoint. Pretty soon we’re going to mess around and get rid of anyone who actually knows how to fight a war…