“Women in the Army are already allowed to wear high-heeled shoes with their class A uniform,” said Brig. Gen. Douglas M. McBride Jr, the U.S. Army’s Quartermaster General. “And to make sure no one feels left out, we’re directing that entire units immediately start issuing these boots and requiring their wear.”

Deputy assistant to the assistant acting Secretary of the Army for Unnecessary Uniform Changes made it clear that it wasn’t just done for ‘style points’. “In addition to being more fashionable, the raised-heel design lightens the foot, thus reducing the probability of setting off an IED pressure-plate, he explained. “Furthermore, it’s impossible to run or even move quickly in these things, ensuring the wearer spends more time searching the ground in front of them.” 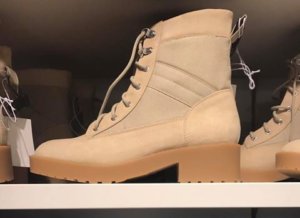 No, these aren’t issue boots… and no Army soldier, male or female, is going to want to wear something like this in uniform.