You are here: Home / Military / Army to Fight COVID with Reflective Belts

Army to Fight COVID with Reflective Belts
by Hugh Jashol

FORT MEADE, MD (Army Public Affairs Center) — The Army, always the slowest of all the armed services to react to new paradigms, is finally catching up to the rest of the country on the COVID-19 front. That’s both good news and bad news for America’s Soldiers. It’s good because it means the Army is going to start doing things they should have done months ago, but bad because they are going to do those things poorly.

In response to the dearth of personal protective equipment on hand in most units, the Army is falling back on a tried-and-true personal safety device: the reflective belt. The belt, most commonly worn during physical training (PT) and therefore colloquially known as the “PT Belt,” is ubiquitous throughout the Army. While designed to be reflective in low-light conditions, it is required for wear with the PT uniform during all hours, and is also required at night with all uniforms for individuals on Forward Operating Bases in combat.

“I know we’re almost in May, but these new steps will bring us up to at least where we should have been back in February,” said Colonel Joseph Maldonaldo, head Army Public Affairs spokesman. “We dragged our feet on personal protective equipment, social distancing, and teleworking, but now we’ve got a plan… a plan that involves the Almighty Reflective Belt!”

The Army took immediate action to preclude the possibility of any type of individuality in the new requirement, providing specific guidance on how the belts should be worn: 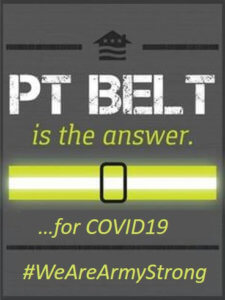 “The reflective belt will be worn in a double-loop pattern that fully covers the mouth and nostrils,” the regulation states. “Officers will wear gold, NCOs green, and lower enlisted red. Soldiers of all ranks will affix non-subdued rank insignia on the front of the mask, centered between the bottom of the nose and the bottom of the chin top to bottom, and between the corners of the mouth side to side. Leaders of all ranks will ensure prompt compliance with this regulation.”

As expected, rank and file Army Soldiers find the new regulation ridiculous. “This new regulation is ridiculous,” said a company commander in the storied 25th Infantry Division who asked us to use the pseudonym “Saff.” “How about we get issued some (biological warfare) protective masks, or at least some hand sanitizer, instead of more BS feel-good, do-nothing regs?”

Those types of protests fall on deaf ears, however.

“Yes, this will inhibit breathing, but I see this as a bonus given how COVID-19 is spread,” said Command Sergeant Major Carole Baskins, the Senior Enlisted Advisor for the 4th Infantry Division.  Plus, she explained, the new regulations provide an additional bonus: “I mean, if we can’t make them get haircuts in the middle of a global pandemic, at least we can inconvenience their lives and jeopardize their health in other ways.”

Yes, the names used in the article were Tiger King references. Hate us if you must, but we loved that train wreck of a show. And while the Army does love its PT belts, they’re not required facial wear for Soldiers… yet.