WASHINGTON, D.C. (Pentagon) — Eager to capitalize on the massive popularity of “first-person shooter” video games, and having nothing better to do at a time when the U.S. is engaged in battling COVID-19 and managing the longest period of sustained conflict in the country’s history, the U.S. Army has recently announced a huge recruiting effort for “eSports.”

What is “eSports,” you ask? Well, it’s kind of like real sports, just without any of the actual… sports. “Calling it ‘sports’ instead of ‘video games’ gives a veneer of credibility to the whole thing,” explained Staff Sergeant William Riker, a long-time video-game… I mean, “eSports…” enthusiast. “If we told Army officials that we were not only using video games as a major recruiting effort, but also had Soldiers—including commissioned officers—doing it full time while many of their colleagues are out fighting actual wars, it would never fly. But everyone likes sports, so here we are.”

Some individuals, especially actual combat veterans, are concerned about the unintended consequences of the move, however. “You mean to tell me that a guy who sits around playing video games all day while I’m out managing property, leading troops, and risking my health and sanity in real life gets the same rank and same pay as I do?” asked Captain J. L. Picard, an Infantry officer with three combat deployments under his belt. “Plus, the recruiting is totally going to backfire,” he added. “We used to get people who ‘only joined the Army for the college money,” he continued, “now we can have people who only joined for the video games. I’m not really sure those are the kinds of people we want to spend the time recruiting, training, equipping, and leading. But hey, I’m sure the Army will have a great Call of Duty team!”

E-Sport branch insignia is expected to be a Doritos loco taco superimposed on a Monster. The branch color will be Doritos dust orange. The DD 1348-6 (Create Heraldry Request) is pending. 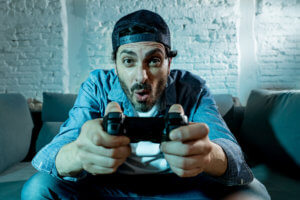 Serve your country and get paid for something you spend all day doing anyway!

You should also mock anyone who wants to play video games fulltime in the Army.  Everyone knows video games are for when you’re on staff duty… or deployments.