You are here: Home / Entertainment / Cop Wrongfully Fired for Negligence During School Shooting Gets Job Back with Pay, Awarded for Saving Own Life and 3 Officers

Cop Wrongfully Fired for Negligence During School Shooting Gets Job Back with Pay, Awarded for Saving Own Life and 3 Officers
by Maxwell Paddington

Sgt. Miller was one of four officers wrongfully terminated last year after a fruitless investigation determined the deputies “neglected their duties” when they responded to the Feb. 14, 2018, mass shooting at Marjory Stoneman Douglas High School which left 34 dead and wounded. While shots rang out from inside the school, Miller performed an initial 10-minute surveillance sweep of the school’s parking lot before contacting the Sheriff’s office. He continued his risk assessment from outside the school for a total of 48 minutes, and astutely calculated it was not appropriate to coordinate a response with subordinate deputies.

“It was best just to wait him out,” said Miller. “The shooter would eventually run out of ammunition, I mean how much could he carry?” He also added, “Besides, based on the number of shots I heard, there were plenty of folks inside the school better positioned to address the situation.”

Sgt. Miller was retroactively awarded the Sheriff’s Medal of Valor for his inaction that day, and is credited with saving his life and the lives of the other involved officers.

The internal investigation found that Miller, who was the first supervising officer responding to the scene, tactically hid behind his car while shots were fired inside the high school. The union said an arbitration ruled the “BSO violated Sgt. Brian Miller’s Constitutional due process rights and improperly terminated him.”

When asked if he was looking forward to returning to his duties at the Broward County Sheriff’s Office, Miller said he planned on collecting his back pay then quitting his job. “I’m heading to San Fransisco, I’m a hero and this country doesn’t just owe me a job with back pay, it owes me a free hotel, alcohol and cannabis.” 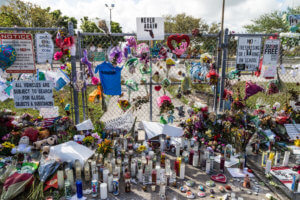 Unions once again prove they are essential in safeguarding the rights of American workers. “How many would have been killed if Sgt. Miller had ‘done his job’ as so many insisted?” said a BSO Association Union official.