BEIJING, CHINA — Facing unprecedented backlash from around the world over their gross mishandling of the Wuhan coronavirus, China and their President Xi and his proxies lashed over social media to try to shift blame onto other countries. After attempts by proxies to blame first “the United States Army” and then, rather inexplicably, Italy, President Xi made a personal public appeal to explain “what really happened” with the origin of COVID-19.

“I was alone, walking back from the Wuhan wet market at two in the morning,” Xi said, “when I suddenly encountered two giant American rednecks wearing racist red MAGA hats. They bit the heads off of two live bats, poured barbecue sauce all over me, put a Winnie the Pooh hat on my head, and yelled “This is MAGA Country!” And that’s how COVID-19 started.” 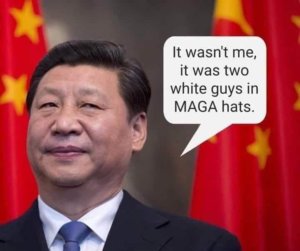 Despite the startling similarities between President Xi’s claims and those of now-discredited hate hoax supervillain Jussie Smollett, China apologists were quick to rush to Xi’s defense when people around the world began to question these latest claims, continuing their time-honored tradition of blaming middle-class white Americans for all problems, foreign and domestic.

“Seems legit to me!” exclaimed a giddy Tedros Adhanom Ghebreyesus , embattled head of the World Health Organization (WHO), who is not at all upset that President Trump cut all U.S. funding for the WHO after that organization badly bungled COVID-related messaging.

“This is just further evidence of this president’s unchecked racism, and further proof that the red MAGA hat is the new white hood (of the KKK),” added Speaker of the House Nancy Pelosi, who would never do or say anything to simply try to embarrass (or try to remove from power) the duly-elected President of the United States.

Much like China’s reported coronavirus death toll numbers, President Xi’s claims about its origin seem highly suspect. Article 107 News reached out to China’s government for comment on this story, but their only response was a “distributed denial of service” cyber attack that shut down our site for two weeks… which incidentally is the incubation period for the virus that they unleashed on the world.

While President Xi made no Jussie Smolett-style allegations, his country’s attempts at blameshifting are even less credible than Smollett’s.  Come on China (and Jussie!), you know what you did…