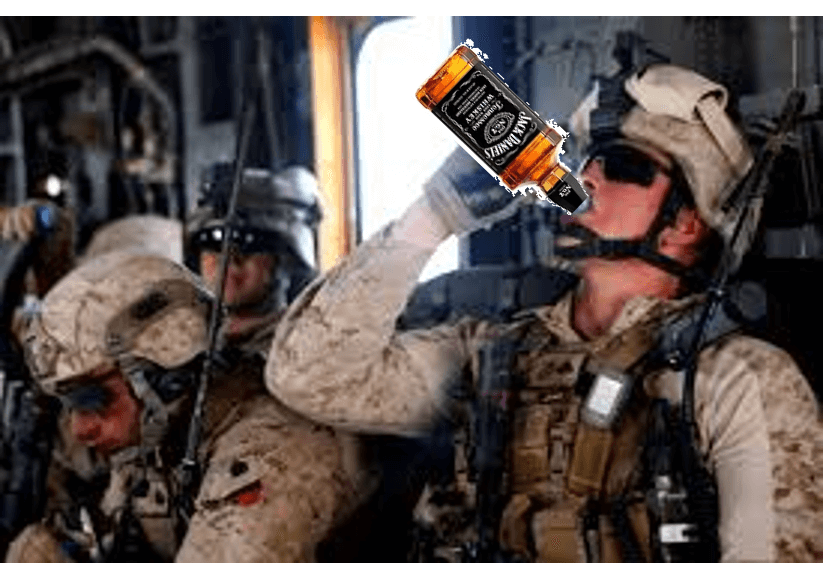 The novel coronavirus is rampaging throughout Asia and threatening the rest of the globe and, as usual, the world is looking for the US to fix it.  As it turns out, those on the front lines of the fight against this disease are receiving help from an unusual source:  the United States Marines.  And they are getting it through an unexpected cause: rampant alcoholism.

The US military boasts the highest alcohol consumption rate among all US career fields, and unsurprisingly, in this area the Marine Corps leads the way.  While alcoholism does indeed have major downsides, such as kidney failure, career-ending bad decisions, and the constant risk of waking up one morning chained in matrimony to a 300-pound dependapotamus, it turns out there are some real benefits when it comes to fighting the coronavirus.

“Extreme alcoholism is the only true coronavirus prophylaxis,” explained Coro Naviridae of the World Health Organization.   “As it turns out, the virus travels through the central nervous system through the same synapses that govern good decision making.  As evidenced by the fact that they joined the Marine Corps instead of, say, the Air Force, Marines are already pre-disposed to making bad decisions.  Combine that with the fact that the level of alcohol in the blood of most Marines would kill a horse, much less a tiny virus, and there is absolutely no vector for this disease in most Marine hosts.  Given what I’ve seen in my research so far, the entire Marine Corps is entirely immune to not only coronavirus, but also to things like ebola, all forms of cancer, job satisfaction, post-service future employability, and the bubonic plague.”

“I’m not even mad, I’m impressed,” said Chief Gunnery Sergeant Major of the Marine Corps Thomas Highway.  “A blood alcohol content (BAC) reading of .08 is usually considered impaired, and .40 or so is usually fatal.  But those are rookie numbers in this racket.  These days a number of our Marines, especially the Lance Criminals, are regularly posting BAC measurements that are whole numbers.  I mean, in my day no one could put up 1.0 or 2.0 BAC and then run eight miles in full kit on the way to fight a killer virus.  I could not be prouder of our Millennial Marines.”

At press time, the Marine Corps was awaiting the last shipment of obsolete, broken-down equipment from the Army that they needed in order to deploy.

Article 107 of the military’s Uniform Code of Military Justice covers “False Official Statements.” As our name implies, we are a satirical site, and you shouldn’t think anything we publish is real. Well, except for the part about the Marine Corps’ equipment, that’s kinda true.  And the drinking.  And the post-service employability bit… .  At any rate, you should definitely mercilessly mock anyone who thinks this is real, especially sites like Snopes that feel the need to debunk us as “fake news,” despite a very clear disclaimer like this one at the end of literally every one of our articles.  If you’re looking for real news, check out our sister site The Havok Journal. Or you can visit us on Facebook or follow us on Twitter at @HavokJournal.  You can follow Article 107 News on Twitter at @Article107News.