WASHINGTON, D.C. — Citing irrefutable evidence after years of careful data collection, the RAND Corporation reported earlier today that their new study shows that chaplains are mostly worthless, a fact confirmed by most Soldiers and almost every battalion commander in the Army.

“We have  lots of love for our Chaplains, but at the end of the day, we’re not sure why we have them anymore,” said every battalion-level officer we spoke to for this story. “It’s hard to see the value they provide, when we have civilians who can perform the same functions, at a lower salary, without counting against our overall manning numbers.”

“They’re officers, but most of them direct-commission into the service and if they don’t start off as captains, they get promoted to that rank pretty quickly,” said one officer who wished to remain anonymous, because he was ‘trying to get right with God.’ “Their authority as officers is extremely limited, as is their knowledge about the Army in general, and officership in particular. And the list of restrictions on what we can have them do is out of control. We can’t even make them pull Staff Duty. All they do all day is run around trying to get people to pray… or at least pray that chaplain’s way.” 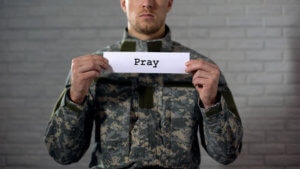 Pray tell just the military has 2,900 Army chaplains, 2,200 Air Force chaplains, and 800 Navy chaplains in uniform? Sounds like 6,000 officers on the payroll (and juicy retirement) for something easily “outsourced”…and who decides which faiths are represented?

“It’s even worse when we’re overseas during the war,” he continued. “Chaplains are all about ‘battlefield circulation,’ which I get, but is more trouble than it’s worth. The troops would really just rather see the psychologists or the Combat Stress folks, because they tend to be young… and female… and won’t try to aggressively convert them to Branch Davidianism or whatever. Plus, most chaplains are forbidden to even carry a weapon in combat… which given their level of training is probably a good thing… but nonetheless I have to put a security detail on them… which of course puts even more people at risk.”

While the rank-and-file troops revealed that they were grateful for the coffee table and Guideposts magazines distributed by the chaplains, they too were skeptical of the chaplain’s roll in the modern military.

All jokes aside, we like chaplains and feel that overall they provide an important service to the military. And there are some genuinely bad-ass chaplains out there, like Vincent Capodanno and Jeff Struecker. However, we pride ourselves on being equal-opportunity when it comes to satire, so get some, Chappie!