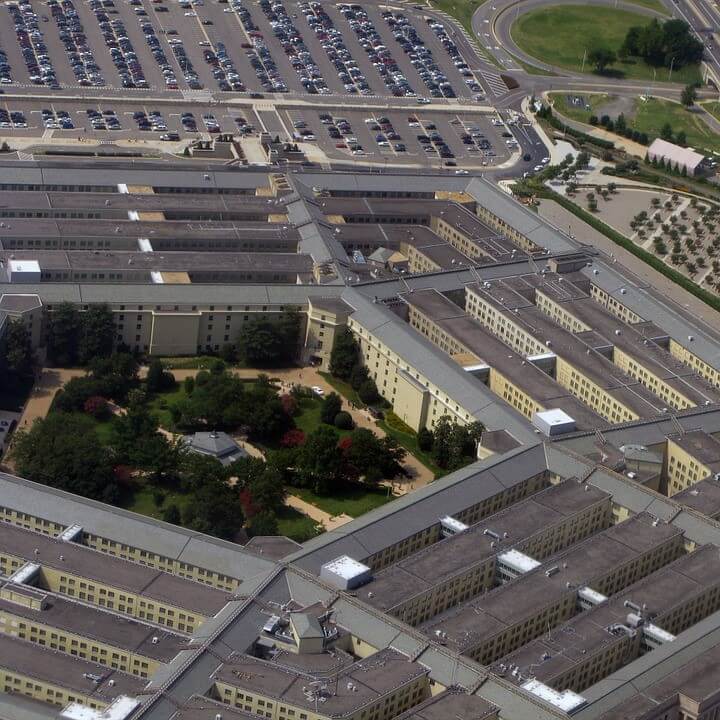 WASHINGTON, D.C. – Article 107 News was contacted yesterday by Deep Throat, our confidential Pentagon insider, regarding potentially embarrassing shenanigans occurring last Monday at the Puzzle Palace. Below is the transcript of the full interview.

“So Barbara Barrett began her term as the Air Force’s 25th secretary on the 18th and most everyone in the Air Force is used to having female secretaries now. But Monday afternoon all hell broke loose in E-Ring and rapidly rippled in towards Ground Zero, sort of like throwing a rock in a pond but reversed. Maybe a nuclear implosion is a better analogy. Yeah that’s what it was – nuclear.

According to my source, Ms. Barrett received a phone call from a BG Rock Oglesthorpe and the conversation went sideways. Now here’s the thing. Nobody knows who this guy is but apparently he has a closet-sized office in G-Ring, which in case you didn’t know is in the basement. They didn’t even know he even worked here. The dude started off in the Air Force in like 1950 and nearest anyone can tell he was retired in 1972. But he’s not in any of the personnel computer systems because he would have been pre-digital. Think Milton from the movie Office Space, except male chauvinist. And, as you know, all phone conversations in the building are recorded and transcribed, mainly because the senior officers are always forgetting what orders they issued. My buddy made me a copy and here’s what went down.”

RO: Hi honey. Are you part of the secretarial pool?

BB: I beg your pardon? Hey is this some sort of Pentagon initiation? Hey, did Deb James put you up to this?

RO: Ok, then sashay your way down to G312 toot suite! And be ready to take some shorthand. I have some important information about the F-80 that we need to get out to the squadrons.

BB: You’re kidding right? Shorthand? Nobody does that anymore and I for sure never learned it.

RO: What! You can’t take shorthand? What kind a secretary are you? What’s your typing speed?

BB: Typing speed? I have no clue.

RO: Can you even work an IBM Selectric honey?

BB: Uh, I don’t even know what that is. Who are you anyway?

RO: It’s a top of the line typewriter you silly girl and even though it’s none of your business I’m Brigadier General Rock Oglesthorpe. But don’t worry your pretty little head about that. Do you at least know how to make coffee?

BB: What? My husband normally makes our coffee. He enjoys doing that.

RO: You’re married!?!? What the hell are you doing in the secretarial pool if you’re married? How old are you anyway?

RO: Sixty-eight years? What in the blazes! Who the hell is running OPM these days? Heads are going to roll!

RO: Zip it honey buns. Can you at least requisition office supplies? I need a new stapler. I had a red one and somebody took it. Now shake your tail feathers and get going.

“A few Generals were in Ms. Barrett’s office when the call happened and that’s when the nuke went off. They ordered security to find Oglesthorpe and bring him up to the SecAF’s office but as of now they haven’t even been able to find G312. Apparently that part of the building is a real rats nest maze and there are no accurate plans. Everyone has been told to be on the lookout for a really old General, but that doesn’t narrow the field down very much, especially with all the Air National Guard officers roaming the halls these days. The other fear is that the guy will die down there and nobody will find the body for years. It’s the biggest shakeup in the Pentagon since Merrill McPeak was appointed SecAF.”