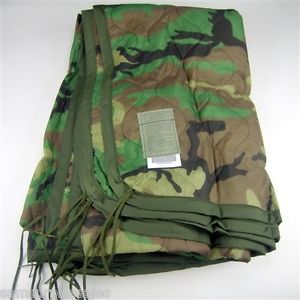 WASHINGTON D.C. – In a dramatic revelation that is sure to rock active duty military and veteran communities all over the world, the Pentagon quietly released guidance directing Central Issue Facilities across all U.S. military activities to recall the “poncho liner”. The poncho liner is a stuffing-filled nylon blanket which is perhaps the most popular and widespread piece of military equipment ever issued, and for commanders to ban the use of ones purchased on the civilian market. These unprecedented actions are reportedly being taken due to troop safety, budgeting, and climate change concerns.

An article in the popular veterans’ blog Task & Purpose titled “Why The Woobie Is The Greatest Military Invention Ever Fielded” triggered the Pentagon investigation that resulted in this new policy. Backed by numerous personal vignettes from veterans and currently-serving troops alike, the findings of the Pentagon’s two-month, $3.1 million dollar investigation into the claims made in T&P’s article confirm that even irregular exposure to the “liner, wet weather, poncho”  (known colloquially as “the poncho liner” or “my woobie”) regularly causes dopaminergic decarboxylation, a condition long recognized as detrimental to good order and discipline within the U.S. Military.

Additionally, at a whopping $16.95, plus tax, each poncho liners are an enormous economic burden on the Pentagon. Funds are desperately needed funds for mission-critical projects such as the F-35 fighter, the Congressional Liaison program, and the Officer’s Club golf course at Ft. Meade, Maryland. It also turns out that the use of woobies contributes dramatically to global warming which, rather perplexingly, is now the US military’s main focus.

While the Pentagon officials responsible for this new policy were unwilling to go on the record due to death threats issued by a shadowy military clique and terrorist group known only as “The Spec-4 Mafia,” the Secretary of the Army, John M. McHugh, gave Article 107 News exclusive insight into both the investigation and its aftermath:

“Based on my extensive experience in dealing with the military, as both a cost-cutting measure and in the interests of good order and discipline, in accordance with the new Pentagon policy I have directed the Army to recall all poncho liners and to establish policies to preclude their use,” Mr. McHugh stated. “The cost savings gained by no longer issuing every Soldier a poncho liner will be enough to buy new rolling leather chairs for every office in (the Pentagon’s) E Wing. This is a much more efficient use of the People’s tax dollars.”

“Furthermore, and most importantly,” he continued, “by using their woobies, troops are also irresponsibly and inconsiderately contributing to global warming by trapping heat inside their woobies and then releasing it all at once when they get up for stand-to or when the Air Force finally shows up for the extract. This is of grave concern to U.S. political appointees in the DoD, because despite the shooting wars going on in Iraq and Afghanistan, …and Syria…, and with the re-emergence of Russia and China as strategic threats, what the President really wants is the military to focus on in the waning days of his presidency is climate change.”

“Besides,” Mr. McHugh concluded, “I’m told that a reflective belt is the only thing you really need to wrap around yourself on a cold deployment night anyway. And with all the personnel cuts we’ve been doing the last couple of months, we now have enough of those to give every person in the entire U.S. military at least two each: one for the upper body AND one for the lower body.  That’s at least TWICE as good as a poncho liner, plus you can wear them doing PT.”

Former Sergeant Major of the Army, Ray Chandler, agreed enthusiastically with the policy. “Troops have been mis-using the liner, poncho, wet weather for its entire existence. I mean it’s right there in its name: ‘liner, poncho, wet weather.’ It doesn’t say, ‘blanket, personal comfort,’ which is all people really use it for these days. No one wears ponchos anymore, and even when they did, they didn’t wear the liner underneath. This constitutes fraud, waste, and abuse and is a gross mismanagement of government funds.”

As an afterthought he added: “Oh yeah and then there’s the issue of troop safety: if there is anything we can’t have in our troops, it’s them having dopaminergic decarboxylation. That’s dangerous in the ranks…but STILL not as dangerous as tattoos.”

Former Army Chief of Staff Ray Odierno offered his opinion as well: “Troops already place an unholy reverence in their woobies,” he explained. “It’s gotten to the point where most troops in the field now consider the poncho liner ‘mission essential equipment,’ right alongside Gold Bond, Skoal long cut, an MRE spoon, and porn. But look, in the space required for a poncho liner, the average infantryman can carry two belts of machinegun ammo, four radio batteries, or the souls of a dozen POGs. Can you believe that? All of that combat potential wasted, simply because some grunt wants to pack his widdle woobie,” he said mockingly. “Putting all this focus on what is basically a glorified baby blanket is unprofessional, and now, demonstrably unsafe.”

“At the end of the day, Soldiers will only take care of the things that are most important to him. I mean, look at Bowe Bergdahl. When he deserted to the Taliban… er… I mean, when he ‘walked off his base to find the nearest general officer,’ all he brought with him was two bottles of water, a fleshlight, and his woobie. That should tell you something right there. Poncho liners cause cancer, and desertion, period. Time to move on.”

When a Pentagon source provided Article 107 News with the results of the investigation that spurred the Pentagon’s ban on the poncho liner, we discovered that the condition created by a woobie is “comfort,” not “cancer.” Oh well, close enough for government work.

In lieu of the woobie, troops will now be issued surplus Iraq War blast blankets lined with 20 grit sandpaper.

“Dopaminergic Decarboxylation” is kind of a made-up term that roughly means “happiness.” The poncho liner, known with great affection (and reverence) as “the woobie,” is hands down the most favorite piece of equipment the military ever issued, to anyone, in any army that ever existed. No, the military isn’t banning or recalling the woobie. I think there would legitimately be a mutiny if they tried.