A shocked Republican party learned an Army veteran running for the West Virginia State Senate was a Democrat after reading about his assault in the The Washington Post. Jonathan Porter, a childhood acquaintance, beat Richard Ojeda, a retired Lieutenant Colonel on May 8 by in what Ojeda called a politically motivated attack. Ojeda acknowledged his incessant questioning about why his constituents, predominately in Logan County, WV, are ravaged by “poverty and political nepotism.” 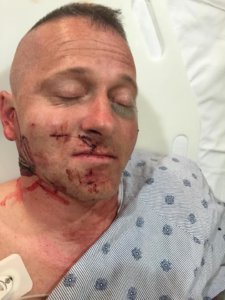 Retired LTC Ojeda in the hospital after the May 8th attacks.

A spokesperson for the Republican party—speaking to Article 107 News anonymously—said party leadership couldn’t believe Ojeda is a Democrat. “We searched and found Ojeda’s name nowhere on the list of Republican candidates. How the hell did we miss him? I mean, look at him,” the exasperated spokesman, also an Army veteran said. “He’s a white male with a ‘high and hooah’, a Sapper tab, Master Blaster wings. He deployed overseas to combat. He’s the perfect candidate for the Republican party.”

The spokesman elaborated, “Look, we all know liberals are all about peace, love, and hating America. They don’t serve in the military. What Army officer this day and age isn’t a Republican?!” A background check by Article 107 News confirmed the anonymous Republican spokesman had indeed served in the Army between 2004-2008 but did not deploy to a combat theater.

The West Virginia race took the country by storm, especially after accusations of a conspiracy surfaced in online comments. One online blogger surmised the beating was arranged by Ojeda to garner votes in a tight primary race. For now, Richard Ojeda is just happy to have gotten back in the race, which he won with 59% of the vote.