CNN and MSNBC’s net worth are each valued at approximately $5 billion. However, offers for both networks are reportedly in the “hundreds of billions” as each authoritarian government attempts to outbid the other.

“It just makes sense,” said RT Chairperson Svetlana Mironyuk. “A cursory examination of either outlet’s headlines shows them to be invaluable to our strategic interests.” She then added: “We’ve seen the rise of the zombie left in the U.S. It staggers around. It attacks everything in sight, slavering and screaming. It forms herds, which go in circles, forever starving for a kind of narcissistic self-satiation. And the end result of all this is that accomplishes…less than nothing. It’s easy to see.”

Both Chinese and Russian officials have expressed difficulty in assigning a monetary value for a U.S.- based MSM outlet’s domestically divisive, ad hominem narrative; but agree that calling it “Mainstream” is itself priceless. 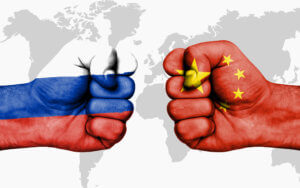 A win-win proposition: Gallup polls suggest the acquisition of CNN or MSNBC by a hostile, foreign government will likely result in a bump in perceived credibility by the U.S. public.