HomePolitics“SCIF Spray: It’s Like National Security, in a Can!” 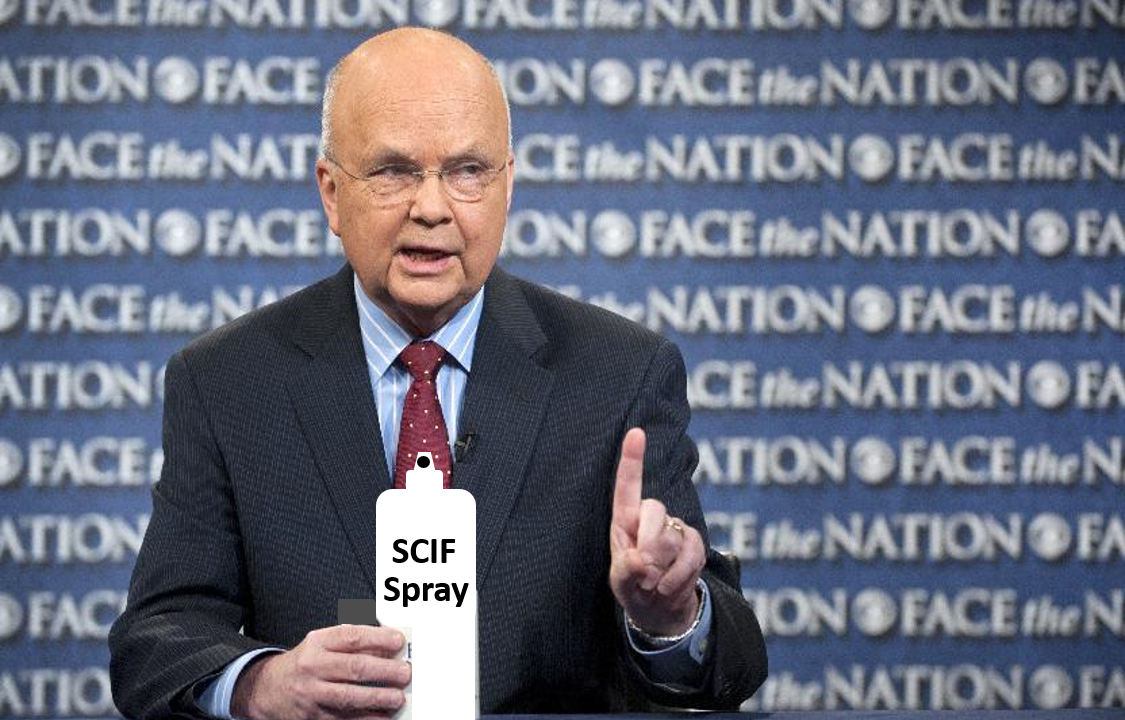 “SCIF Spray: It’s Like National Security, in a Can!”
by Hugh Jashol

Editor’s Note: This article first appeared on The Shadowblog and first re-posted in Article 107 News January 20, 2016 with the permission of the original author.

WASHINGTON D.C. – Still stinging from revelations that he leaked sensitive national security information while on the Amtrack Acela train back in 2013, former Director of National Intelligence (DNI) Michael Hayden has re-invented himself in a most-unlikely way:  as a personal security product pitch man.

“After the former Washington director of MoveOn.org overhead me leaking sensitive details related to the latest NSA spying scandal, I realized something:  some people simply don’t respect boundaries,” Hayden explained to a gathering of young entrepreneurs.

“I know that the ‘rules’ for handling national security secrets stipulate that information is only to be shared with people with a bona fide need to know, and then in a secure compartmentalized intelligence facility or SCIF,” Hayden said, using air quotes around the word “rules.”  “But that kind of stuff is for chumps, not big-wigs like me.  I used to not have to worry about who I leaked national security secrets to, or how I did it.  But folks, just like the NSA leaks indicate, we’re in a brave, new world.  You never know who might be listening in on your conversations, and more importantly, who might blab about it.”

“It used to be that, as part of the country’s political elite, I could violate all manner of security regulations all I want without fear of any punishment whatsoever.  And while that’s still kind of true, now I have to worry about getting ‘outed’ as the ‘anonymous source’ cited by reporters that I reveal secrets to in order to make my political opponents look bad.  And that’s embarrassing.”

“But not anymore!  That Sham-Wow guy has nothing on me!” Hayden exclaimed before donning a microphone headset and launching into a full-on endorsement of SCIF Spray™.

“But now, with SCIF Spray™, I never have to worry about getting caught compromising national security ever again.  Shake up the Spray, give a couple of squirts into the air, and the patented formula automatically de-classifies any secrets it touches.  It comes in Confidential, Secret, and TS/SCI flavors.  It’s like national security in a can!  I have a can for my home, my office, my car… hell, there’s even a handy travel-sized version that’s small enough to get under the TSA’s liquid screening threshold at the airport.  Now even the lowliest intelligence analyst can compromise national secrets with impunity, just as if he or she were a former DNI like me.”

It does appear that GEN Hayden might be on to something.  9 out of 10 Special Security Officers (SSOs) interviewed for this article recommend that high-level intelligence figures always use SCIF Spray when talking to reporters about national security on an unclassified phone while in a public area.  (The 10th SSO interviewed simply recommends that they STFU about it—but no one likes that guy anyway).

We tracked down the inventor of SCIF Spray™, former Army intelligence specialist Troy Gunter, in his mother’s garage, which also doubles as the headquarters of the SCIF Spray™ empire.

“I was the SSO for the 2nd Special Forces Group,” Gunter explained, “and I was always having to get on to the team guys about mishandling classified information.  That’s when they told me about the ‘SCIF pocket,’ which is a special pocket that only Special Forces guys have, where they can secure, store, and transport any level of classified information for whatever duration, and to whatever location, they choose.  I never heard of that before, and I couldn’t find it in any regulation, but the SF guys insisted it was a real thing and told me to quit bugging them about it.  When I got out of the Army, I tried to expand and monetize the SCIF pocket idea for the civilian market, but the SCIF Poncho™ didn’t work out.  But once I hit on the SCIF Spray™, I was golden.”

Gunter explained that he is developing a whole line of personal security products “for the fashion-conscious intel leaker.”  He refused to confirm or deny that SCIF Spray™ was in negotiations with former NSA traitor Edward Snowden as its next celebrity endorser, and he would not comment on SCIF Spray™’s secret formula. “The fact that it looks, smells, and feels exactly like WD-40 is purely coincidental,” he added.