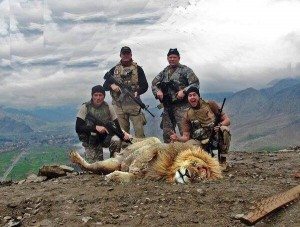 This article first appeared on The Shadowblog and re-posted here January 24, 2016 with the permission of the original author.

KANDAHAR, AFGHANISTAN – News that an elite group of Army Special Forces troops have been partaking in a highly illegal endangered species hunting ring threatens to deal yet another blow to already-tenuous relationship between the U.S. and Afghanistan. News of the ring first broke over Twitter when Hamid Jawad, former Afghanistan ambassador to the US, tweeted from his new position as a fellow in the Harvard Kennedy School.

Ambassador Jawad displayed his trademark diplomatic acumen and Harvard’s touted academic rigor in a hard-hitting, highly-researched expose, which included a photo showing four grinning U.S. servicemembers brandishing their weapons around the mutilated corpse of a never-before-seen Afghan lion. A copy of the tweet, which for some reason has since been deleted, is posted below: 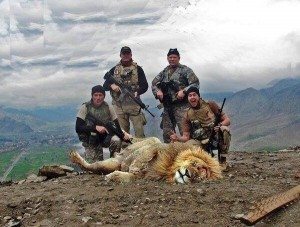 Secretary of State John Kerry was quick to manage the damage.  “We are grateful to Ambassador Jawad for exposing this nefarious exploitation by our troops of the world’s most endangered large predators,” Secretary Kerry said today.  “This is far more serious than ‘green on blue.’  I will immediately direct the Department of Defense to investigate, prosecute, and end the careers of anyone found to be involved in this ring, or in its coverup.”

Rolling Stone, a magazine long known for its accuracy in reporting matters related to US Special Forces,  followed up Ambassador Jawad’s twitter post with a full-length article.  In it, they revealed how they tracked down the four individuals pictured in what has become known as the “Lion King” photo, all of whom were members of the  2nd Special Forces Group.  Rolling Stone reports its sources confirmed that the hunt took place.

“Al Qaeda might have gotten the Lion of the Panjshir, but we got the last lion in Kunar!”  Rolling Stone quoted one of the anonymous Special Forces troops saying.  It is unclear what the “Lion of the Panjshir” means, as African lions are not known to reside in Panjshir district of Afghanistan.

Some military insiders were less sure of the photo’s provenance and the Rolling Stone story’s accuracy.  “You know how I can tell these guys aren’t Special Forces?” inquired one Pentagon source with a Special Forces background who we spoke to for this article, “A couple of things.  One, nobody in that picture has a beard.  Two, no one has their hands in their pockets.  That’s a dead giveaway.  Three, look at their kit.  My teenage son plays Airsoft and he’s got better gear than these clowns.  And four,” he added, pausing for dramatic effect, “African fucking LIONS?  In Afghanistan?  Bwahahahaha.”

A separate military source who also wanted to remain anonymous was even more direct.  “You know how I can tell this is a BS story?  Because it’s a military-related article published by Rolling Stone.”

Ambassador Jawad categorically rejected claims that the photo, and its story, are poorly-contrived fakes.  “Yes, I know that I spent more of my life outside of Afghanistan than in it at this point,” he said, “but I still know my own country, and I’m telling you, this picture is accurate.  I can prove it.  See those clouds in the top left corner?  Those kinds of cloud formations are only visible in Kunar province.  And those kinds of lions are only found in Kunar.”

“Some people might question why I sought asylum in the US after my ambassadorship was concluded, or say that by making tweets like I did, that I’m ungrateful to the US military for liberating my country from the Taliban and giving people like me a job that gets me the hell out of Afghanistan,” said Ambassador Jawad through his interpreter, in an interview held in the rarified air of his ivory tower office.

“But how will I expose the depths of the greed, the exploitation, and the treachery of the US military if I’m in Afghanistan?  Look at what we have here: not being content with murdering innocent Afghan citizens, now the US murders Afghan lions.  This is a case in point why I must remain here in the U.S., even though I renounced my US citizenship.”

Senator Paul Ryan (R, WI) introduced Senate legislation to make things right with Afghanistan.  “We owe it to the Islamic Republic of Afghanistan to make this good.  So because of this incident, the retirement pensions for any US military member who ever served in Afghanistan will be reduced by 6.5% to create a trust fund to support Afghanistan’s endangered species.  This fund will be administered by Afghanistan’s former President Hamid Karzai and will be spent at his discretion.”

There is no word yet on how this will affect the US’s decision to keep its military in Afghanistan until 2024.

Yes, we know that the image in this article is (badly) PhotoShopped, that the people pictured are not Special Forces soldiers, that this picture was taken many, many years ago and that there is no 2nd Special Forces Group.  And yes, we know that there are no wild African lions in Afghanistan.  But we also know that when this very fake-looking picture started making the rounds people really did think this was a real thing, because they want to believe the worst about America’s armed forces.  Making fun of them through satire like this is a way to make sure they don’t do it again.  And making fun of people who fail to realize that this is satire despite some very clear indicators such as our very conspicuous disclaimer, the name of the author (“Hugh Jashol?” come on…), and the absolute ridiculousness of both the photo and this story’s content…. well, that helps ensure they actually read and critically consider “news” the consume in the future. That’s win-win for everyone.