You are here: Home / Politics / Sean Penn Awarded “Informant of the Year” by FBI for El Chapo Capture 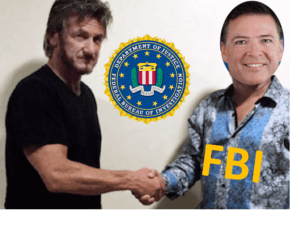 Penn, a pampered ultra-liberal long hated for his anti-American sentiment and collusion with dictators, criminals, and enemies of America, received “Informant of the Year” recognition by the FBI.

During the award speech, FBI director James Comey explained this shocking turn of events. “All this time, the world thought that Sean Penn was just another no-talent, pretentious attention-whoring Hollywood assclown.  But the whole time, he was OUR no-talent, pretentious attention-whoring Hollywood assclown.  We absolutely would not have captured El Chapo without Sean Penn’s meddling, and the whole world knows it.  It is my pleasure to tell everyone how happy we are with this outcome, and we’re sure there will be no negative repercussions for Agent Penn.”

Penn has since inexplicably gone into hiding and was unavailable to comment on this story.