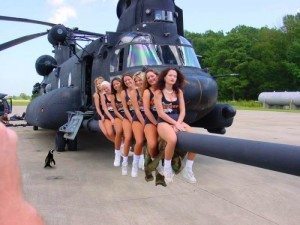 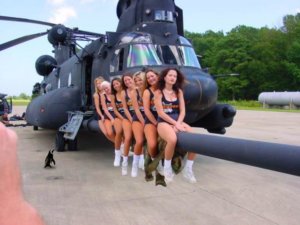 A Freedom of Information Act filing by Article 107 News revealed that the day in question started off in a manner typical of Special Operations professionals the world over: a hard day of Freedoming, then a quick dash to their favorite pub to regale the local trollops with tales of their top-secret missions.

“After all, it’s no fun to be in a secret unit if no one knows you’re in it,” explained a random former Navy SEAL we contacted for this story. Because we all know SEALs are more than willing to talk about anything related to Special Operations.

After drinking from noon until about 4p.m. local time, the 160th members, along with 24 waitresses from the Savannah Hooters restaurant, returned to the flight line at Hunter Army Airfield. Their intent, according to a young air crew member, was to “Ring in the New Year right, knowwhatImean?” After a quick “area orientation flight” around the Savannah area in the back of a highly-classified MH-47Q-model Chinook, the Hooters Girls posed for various photos with the 160th’s pilots and airframes. For some reason, a particularly popular photo location was on the refueling probe of the MH-47Q helicopter.

A rare Emperor Penguin, a “souvenir” of the 160th’s most recent training mission to Antarctica (shown in bottom left corner of photo above), was a hit with the Hooters Girls and is featured in many of the photos with them, even though he became a bit “bitey” as the night wore on and no one was able to produce the live cod that is a staple of his diet. Everything was fine until the Hooters Girls decided to pose for a group shot on the probe of the commander’s MH-47.

Unfortunately, the combined weight of the women on the refueling probe caused the very phallic-looking device to snap off, dousing everyone in the area with highly flammable liquid and sending a spray of highly-toxic JP-8 fuel into the nearby Savannah River. A quick-thinking crew member saved the day by activating the MH-47’s chafe and flare system, igniting the fuel and sparing the unit from a career-ending “environmental damage” report. “I shudder to think what would have happened had they disturbed the local red cockaded woodpeckers,” said a forestry service official we contacted for this story. “We could have shut that whole battalion down permanently if they had.”

While no people were harmed in the ensuing blaze, Benny the penguin was burned beyond recognition and somehow ended up on the menu, after a bet between a crew chief and a Hooters Girl that “penguin does too taste like chicken.” 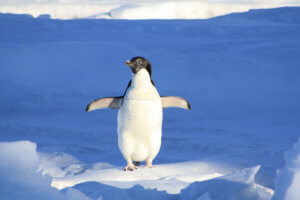 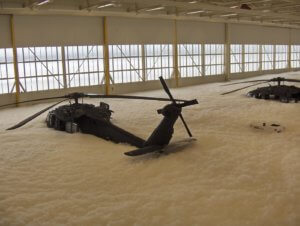 While it was hard for us to find anyone other than SEALs who were willing to talk about this incident, we were able to get some solid answers from within the pages of the released report on the incident. First and foremost, how did dozens of Hooters girls, none of whom (presumably) have top secret security clearances, get access to the 160th pilots and airframes in the first place?

“There’s a long history of…”civil-military relations” between the 160th and Hooters,” the report quotes CW5 Mike Harris, who has been in the unit since its founding in the aftermath of the “Desert One” fiasco. “One of our companies is even nicknamed ‘Hooter Brothers,’ it’s a natural match. Look, I know that a barbecue between SpecOps warriors and Hooters waitresses might seem a bit…unconventional to much of America but hey, at least ‘they had the guts to fry.'”

After the cookout, the revelers moved into the hangar for a “bubble party,” an event where a generator produces clouds of soaps bubbles for partygoers to play in. Unfortunately, even though everyone knows we use the metric system in the U.S. military, the privates responsible for making the bubble mix made it for “gallons” instead of “liters.” As shown in the never-before-seen photograph posted above, the individuals responsible for making the bubbles got distracted by one of the Hooters girls…”assets” and, well, the rest is SpecOps “Bubble Party” history.

There is no word yet as to the total dollar amount of damage. But it is expected to be at least a Class B Aviation incident, which is reportable to SOCOM. Four MH-60W helicopters and two “Little Bird” attack helos are estimated to be total losses. At press time, there was no word yet as to General Mulholland’s reaction to the news.

No penguins or Hooters Girls were harmed in the making of this story. Because…you know…it never really happened.