Prospects of a Trump acquittal in the ongoing impeachment debacle dimmed late Friday after Democrats added a new charge:  copyright infringement.  The latest charge in the Articles of Impeachment stems from the recent unveiling of the new Space Force logo.  In shape, style, substance, and genre Trump’s Space Force logo is clearly a copy-and-paste ripoff of the world-famous “Starfleet Command” emblem popularized in the well-known Star Trek series, which is owned by media giant Paramount Pictures. 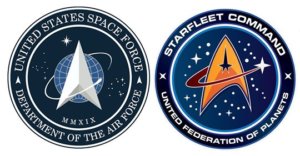 Trump acknowledged his role creating the new logo in a trademark tweet: 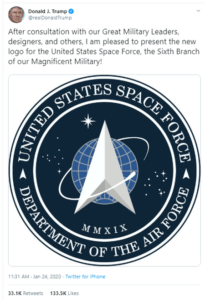 Democrats wasted no time in pouncing on this latest Trump gaffe.  “As Commander in Chief, Trump bears full responsibility for this heinous act,” said Democratic presidential hopeful Elizabeth Warren.  “Following the time-honored tradition of trying to tie every Republican scandal back to Watergate, we were going to call this scandal “Stargate,” she explained, “but we didn’t want to get sued by MGM like Trump is going to (hopefully) get sued by Paramount.”

“We are soooo fortunate that the President finally gave us something we can actually pin on him,” said “impeachment manager” Adam Schiff.  “The Russia hoax didn’t work.  The Ukraine witch hunt was dead on arrival at the Senate.  We tried racism, sexism, Islamophobia… basically everything.  Nothing worked.  But now, we have something Trump actually did do, and instead of our usual MO of us trying to pin things we did on him, this is actually something he did do.  This is our chance, people!  To quote President Alexander Hamilton,  I just have to say “I’m not throwin’ away my… shot!”

“Our founders’ vision of a republic is under threat from actions from the White House,” added a sad and solemn Nancy Pelosi.  “It is a little-known fact that the only “high crime” specifically mentioned in our Constitution of  1778 is ‘infringement of space-based intellectual property,'” she continued.  “If we do not act now, we would be derelict in our duty. It’s tragic the president’s reckless actions make impeachment necessary. He gave us no choice.”

Article 107 of the military’s Uniform Code of Military Justice covers “False Official Statements.” As our name implies, we are a satirical site, and you shouldn’t think anything we publish is real. You should, however, mercilessly mock anyone who does… although we do think that there is kinda sorta just a liiiiitle bit of resemblance between the Space Force and Star Trek logos.  At any rate, you can follow Article 107 News on Twitter at @Article107News. If you’re looking for real news, check out our sister site The Havok Journal. Or you can visit us on Facebook or follow us on Twitter at @HavokJournal.