I’m pleased to announce that just 45 days after its inception, the United States Space Force has claimed a stunning first victory with only 16,000 personnel and no tangible weaponry. The First Intergalactic War began on 20 December 2019 with an interstellar communication notifying all sentient beings of the existence of the USSF and our intention as the Earth’s first military space-borne force, to claim the entire universe on behalf of the United States of America. We gave them 40 days to respond with a counter-claim and all we got was silence, which we took to mean that they were okay with us taking over the universe.

I mean, if ancient explorers could just plant a flag on a beach and claim a continent, or the Chinese just move onto an island and say it’s theirs, then why not the universe? As everyone knows, we got ownership of the Moon by going there first and sticking a good ole Stars and Bars in it. And if everyone remembers, nobody disputed that it became ours at that point.

So if anyone thinks they can take the universe back from us, all I have to say is that we are the most powerful and only militarized space force in the universe, so give it your best shot! Commies, Norks, Coneheads, E.T.s mom and dad, or Alf, we aren’t afraid of you!

Bring it on!!! I need the campaign ribbons! 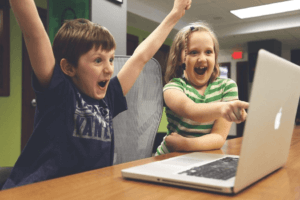 Pictured above: 5th graders at Bromwell Elementary School in Denver, CO.
Matthew Johnson and Kristen Miller’s reaction after finding out the U.S. Space Force was a real thing.