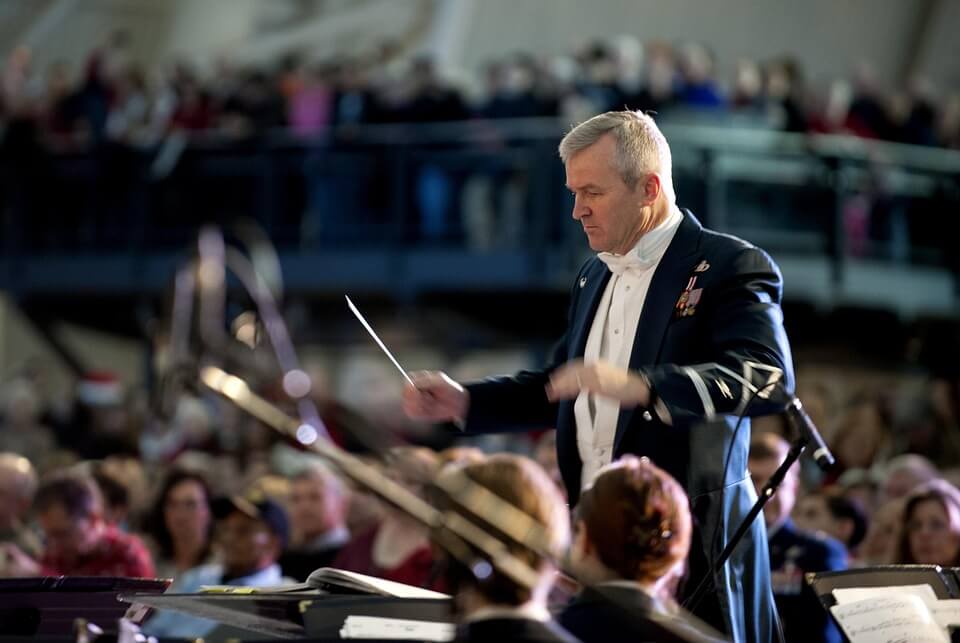 JOINT BASE ANACOSTIA-BOLLING AFB, WASHINGTON, D.C. – It was announced today that Air Force Band Leader, Col Herbert Smythe Smithson Jones III, was relieved of duty yesterday due to lack of confidence in his leadership style. Col Jones entered the Air Force three years ago after completing his PhD in Music Appreciation with a minor in Interpretive Dance.

When Col Jones joined the Air Force in 2016 there was much ado regarding his accession. Top Pentagon brass were all aflutter at being able to snag such talent and the following comments are illustrative of the frenzy of the time:

“You should have seen this guy flicking his baton! Standing up proud, tall, and erect in front of all those other musicians. Flicking away to the beat with a rising crescendo, the heat and passion coming to a boiling point. It was such an arousing scene.”

“I’m telling you, this guy is going to solve all of the respect problems we have with the bands. The troops will love them so much that the ‘band camp’ and ‘band geek’ jokes will cease. Morale will shoot through the roof and I’m going to push for him to become an adjunct instructor at Air War College. For sure our warfighters can learn some valuable combat lessons from the likes of ‘Smithsonian’…yeah we gave him a call sign.”

“Have you ever been to one of his performances? I rate it right up there with some of the hard-jamming concerts of my early years. I had flashbacks of a performance by The Carpenters when I was 22. I shouldn’t say this but that night was magical and I got to 2nd base with my date that night.”

Alas, as is so common amongst the stars of Hollywood, Colonel Jones burned brightly and hot but the celebrity got the best of him. It started with just small demands, like WalMart bottled water in his dressing room instead of tap water. Or having a Chief (USAF E-9) pick all the turkey out of his Chicken ala King MRE and then feeding it to his pet earthworm, whom he affectionately named ‘Bob Fosse.’ 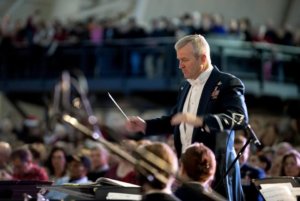 Col. Jones checks his hair and medals
in the reflection of his highly polished music stand.

As his decline continued it was reported to Article 107 News that he was often abusive to his Aide-de-Camp, Capt Richard Simmons, who described just one of many examples:

“I remember one time we were doing a concert in Las Vegas, and man that was a brutal TDY. Anyway, Slim (that’s what we called him behind his back) was really upset because Bob Fosse wouldn’t stay on the diamond studded leash he had purchased for him in Paris. Anyway, he just took it out on me. He made me put on a wetsuit and stand in front of the audience, which was a packed house that night with I’m guessing upwards of 35 people. He then demanded that I recite the Air Force Core Values over and over. Then he started throwing apple cores at me while screaming, “No these cores you whale turd!! These cores!!” I sobbed for a week after that one.”

The beginning of the end came when the Air Force Audit Agency discovered over $250K in purchases from Victoria’s Secret that had been charged to the Colonel’s GTC. Air Force OSI (Office of Special Investigations) secretly searched the Colonel’s residence and discovered all the lingerie (which happened to be on the large side) and a photo album of him in many of the outfits. One of the agents provided a few more details.

“We secretly entered the suspect’s residence by simultaneously busting down the front door, the back door, and all the windows. Then we made sandwiches, drank all his wine coolers, and took a nap. Then we searched and found all those panties, bras, thongs, stockings, corsets, baby doll nightgowns, full-length gowns, thigh high boots, arm length gloves, tap pants, boy short panties, tanga panties, briefs and garter belts. Then we found the photo album with pics of the suspect wearing all of that. I gotta say he was pretty hot in those outfits. He sure had the body to wear them. I decided to investigate the album further so I took it into the bathroom, where the light was better, and I locked the door. After I was done we exited the property by peeling out in our trucks on his lawn and headed out to Hooters for some more investigation. We did such a good job that he never had a clue that anyone was in his house. What an idiot!”

The downward spiral for the hapless Colonel hit rock bottom during a concert for the Crown Prince of Saudi Arabia, hosted by General Ira Fourohonekay, who was kind enough to present a narrative of the events that night.

“The first number the Colonel chose for the evening was a 50’s pop song called “Ahab the A-rab” and at the conclusion of that piece he exited for a costume change. He returned dressed as an Arab belly dancer and began a new number called “The Sheik of Araby” during which he did the interpretive Dance of a Thousand Veils. Swaying his hips, he fondled the Prince’s beard and asked if he had goats and camels in his palace and how many women he had in his harem. He topped off the performance by asking the Prince if eunuchs get all the meat cut off or just the ‘two veg’.”

The General was then asked about which of the items in particular caused the loss of confidence in Col Jones ability to lead.

“What? No, all of those were fine. I didn’t see a problem. You said it yourself, we lost confidence in his ability to LEAD. The dude lost his internal timing and lost the beat. He couldn’t lead the band and they were all over the place. Frankly it was embarrassing. We are the world’s preeminent Air Force and this guy has timing like the way a white guy dances. No rhythm. So I sacked him. But just so that you know we aren’t uncaring bastards we didn’t kick him out. We wanted to put him where he couldn’t do any harm but still finish his career, so we gave him a fighter wing.”

Official sources say there is absolutely no connection between this event and the current pilot retention issues.

Untactic Al had a rather controversial and checkered 36-year career in the United States Air Force. He recently received his DD-214 blankie. The fact that he made it as far as he did merely illustrates the incompetence of his leadership.

Article 107 of the military’s Uniform Code of Military Justice covers “False Official Statements.” As our name implies, we are a satirical site, and you shouldn’t think anything we publish is real–including the random stock photo used in this article. You should, however, mercilessly mock anyone who does. You can follow Article 107 News on Twitter at @Article107News. If you’re looking for real news, check out our sister site The Havok Journal. Or you can follow us on Twitter at @HavokJournal.