This first appeared in Article 107 News in February 2017. 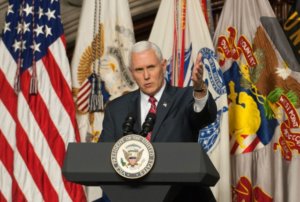 Pence at West Point: “You get amnesty… YOU get amnesty…everybody gets amnesty!!!” But does he have the authority?

WEST POINT, NY – In a move that has become all too typical in this new administration, Vice President Pence exceeded his Constitutional authority on Friday by using his platform as a dinner speaker at the United States Military Academy at West Point to unveil his own, personal amnesty program.

To raucous (and distressingly militant) applause in the West Point cafeteria, Pence announced that he would personally grant amnesty for all minor offenses committed by the most conservative body of college students in the nation.

Looks like the 200-year-old military academy, long known for its history of violent political protests, just got a free pass for a little bit of the ol’ ultra-violence.

But does the Vice President even have the power to grant amnesty?

The answer, of course, is a resounding “NOOOOOOOO!!!!”

Let’s just see what the Constitution has to say about this, shall we?

The President shall be Commander in Chief of the Army and Navy of the United States, and of the Militia of the several States, when called into the actual Service of the United States; he may require the Opinion, in writing, of the principal Officer in each of the executive Departments, upon any Subject relating to the Duties of their respective Offices, and he shall have Power to grant Reprieves and Pardons for Offences against the United States, except in Cases of Impeachment.”

Hm, interesting, nothing about the Vice President anywhere in there.  I guess this “doing your own thing” is par for the course in an administration that has already put the U.S. economy in the toilet and refuses to have any meaningful integration with important international players like Israel and China.

But hey, at least those West Pointers got their amnesty.

Yes, the Vice President granted “amnesty” at West Point. But it’s the kind of amnesty that wipes out demerits for having a dirty uniform or showing up late for your military training class. It’s not the kind of thing that gets you…I don’t know, released from prison after betraying your country, or that allows millions of people living here illegally to stay. There’s nothing “constitutional” about it; it’s simply a long-held (and for the cadets, much-appreciated) tradition that means absolutely nothing outside of the Academy. So stop getting worked up over nothing, and THINK before you “persist” or “resist.” And oh yeah, check out our sister site The Havok Journal if want real news.