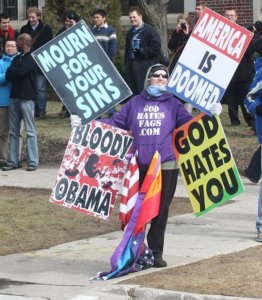 Two extremist groups coming together in protest of… something.

EUGENE, OR – Vowing not to let any tragedy go without making things awkward and painful, representatives of the controversial Westboro Baptist Church announced plans to protest the funeral of controversial militia leader Robert “LaVoy” Finicum. Law enforcement officers killed Finicum during the arrest of the group’s leadership early Wednesday morning. The militia had occupied the Malheur National Wildlife Refuge in protest against the Bureau of Land Management.

“I think nothing shows God’s disdain for our degenerate, homosexual-loving nation than the violent death of one of its defenders, no matter how misguided,” said Shirley Phelps-Roper, the group’s spokesperson. Phelps-Roper was the first to admit that this new event marked a shift in the group’s previous and infamous policy of protesting military funerals. “While we would love to show our faith in front of the grief-stricken families of a young Marine or soldier, that Infidel-in-Chief Barack Hussein Obummer’s refusal to commit more troops into exhausting wars of attrition really cut off the supply of protestable funerals. But this guy at least thought he was defending the Constitution, so we will take what we can get.”

Members of the Bundy family, the Nevada ranchers who formed the nucleus of the Oregon militia standoff, were not amused.

“These people have crossed the line,” declared Cliven Bundy, patriarch of the Bundy clan, brandishing a Winchester Model 1873 in one hand and a copy of The Complete Idiot’s Guide to the U.S. Constitution in the other. “All we wanted to do was occupy Federal land with dozens of armed men for an indefinite period of time, but these bozos are hijacking our selfless patriotism at a moment of weakness and using it as a political stunt.”

Despite the protest, Phelps-Roper was insistent that her group was within its First Amendment rights to shamelessly co-opt the tragedy.

“It’s a life or death struggle out there,” said Phelps-Roper as she loaded her minivan with signs that read THANK GOD FOR DEAD RIGHT-WING LIBERTARIAN MILITAMEN. “Do you have any idea how hard it is to get press coverage for being an uncompromising whacko when Donald Trump and Ted Cruz are leading the polls?”