The U.S. Navy’s plans to loosen its physical fitness requirements and to stop the separation of sailors previously deemed too fat for sea duty has heaped another dose of shame onto the collective heads of the US military’s most-maligned branch of service.  Perplexed why the Navy would need to go to extreme lengths to retain unfit personnel during a period of massive military downsizing due to Congressional Sequestration, Article 107 News reached out to the Navy Public Affairs office for comment. 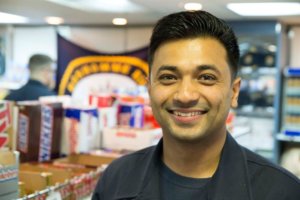 “Go ahead Chubby, have another Snickers.”

“The US military, like the country as a whole, is adjusting to the concept of “full-figured reality,” explained US Navy spokesseaperson Chief Petty Officer R. Lee Burke.

“Most people in America aren’t fit enough to serve anyway.  So instead of doing something about that, we’re just going to go ahead and enable unfit people to stay in.  This policy change just reflects the changing fitness levels of the average American seaman… er, ‘sailor,'” he added, using the proper new non-gender-specific way of referring to US Navy personnel.”

“I mean, if “plus size” is good enough for the cover of Sports Illustrated, it’s certainly good enough for the United States Navy,” he concluded with finality, before dashing off to the ship’s store to purchase another case of Twinkies and half a gallon of Rip-It.

Not everyone sees things the same way, however.  “Navy, A Global Force for Good?”  scoffed famed former Marine General James Mattis, mocking the Navy’s former motto. “More like ‘A Global Force For Good Eating.’  Look at all these fatbodies…those boots would never last a day in my Corps.”

Taking a page from the US Army, who hasn’t had a decent service slogan since “Be All You Can Be,” the Navy is again switching mottoes. Reflecting their sailors’ burgeoning waistlines, the new Navy slogan, to be revealed at the next Army/Navy football game, is “Navy:  Grow With Us.” I guess it’s better than “Navy:  You Can Wear White Socks.”

Meh, it’s growing on me.

And you should mock the Navy too. Come on folks.