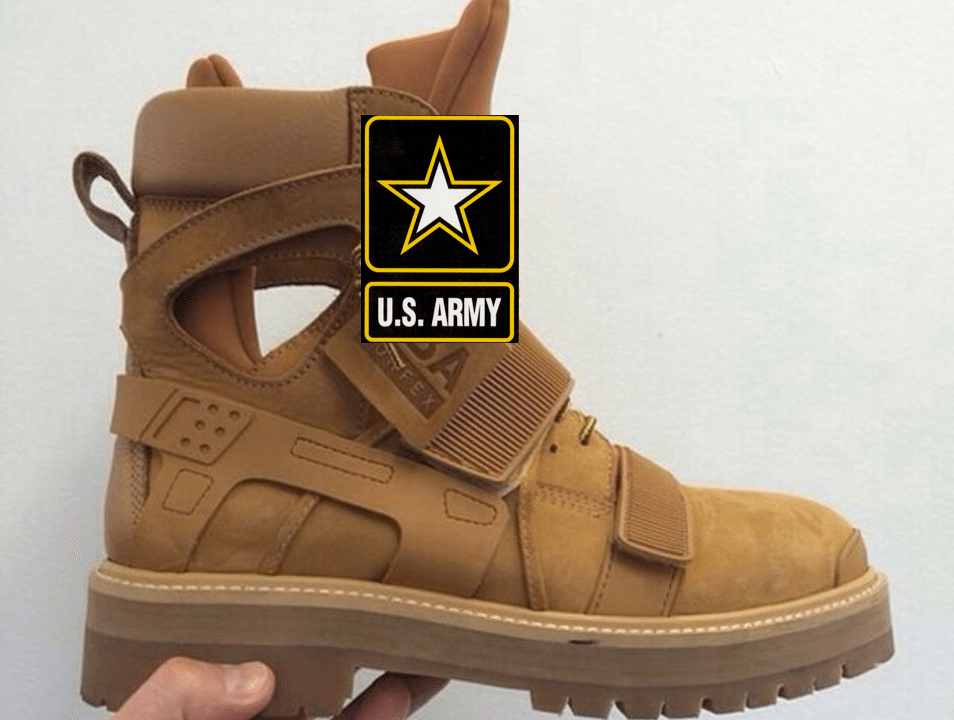 Due to difficulties in finding enough recruits who are healthy enough, smart enough, and fit enough to serve in the US Armed Forces, the Army and the Marine Corps are taking a closer look at the policies affecting those troops who do make the cut.

“Too many troops are getting injured during Basic Training.  The rate of lower extremity injuries, especially to the foot and/or ankle, are particularly troubling.  Much of that can be attributed to inadequate military footwear,” explained Sergeant Major of the Army Frank Castle.

“Additionally, too many troops are coming into Initial Entry Training unable to perform basic survival skills, such as balancing a checkbook, telling a legitimate prostitute from a police sting, and going without Twitter for ten damn minutes.  They can’t even tie their own shoes.”

It’s that last bit, troops not being able to tie their own shoes, that led to these latest changes in military footwear.  General Mal Aise, commander of the Army’s Training and Doctrine Command (TRADOC) explained:  “Years ago, many troops entering the military didn’t know how to drive stick (manual transmission vehicles).  So instead of teaching them this important life skill, we just decided to install automatic transmissions in all of our vehicles.  This is just the latest evolution of that same concept.”

The newly-issued boots feature a series of Velcro straps (known in Army parlance as “fasteners, hook and loop“) in lieu of traditional laces, as well as cut-out sides to lower the weight.  These changes have Army and Marine Corps drill sergeants feeling very pleased.  Gunnery Sergeant Pete Ilskop, a Paris Island drill sergeant, had this to say:  “Teaching troops to tie their own shoes takes away valuable training time that could be used to teach them about stuff like inter-service rivalry, the dangers of using a poncho liner in the field, Facebooking Under Fire, and/or SHARP; you know, the things they’re really going to need to know in order to be successful in today’s military.”

Private Joseph Phillips, an Army Infantryman assigned to One Stop Unit Training (OSUT) at the Army’s Fort Benning, Georgia, reached out to us today while home on a three-week leave from Basic Training.  He had this to say:

“On the advice of my older cousin, who is a Marine, my entire pre-Army training consisted of obsessively reading through ‘U.S. Army WTF Moments‘ and ‘Awesome Sh*t My Drill Sergeant Says‘ on Facebook.  When I read things like ‘some privates these days are so dumb that they don’t even know how to tie their own shoes’  I thought they were pulling my leg… you know, like telling me to “finding a box of grid squares” or “bring back some chem light batteries” or some such. But that… was before I got to Basic Training and got issued this (see attached photo).”

The Army is not the only service to make the switch to the new footwear; the Marine Corps will start issuing the modified boots after one important modification is made.  Mr. Dave Haskle, head of procurement for the Pentagon, explained:  “The only difference with the Marines’ boots is that they put their propaganda emblem… I mean, the Eagle, Globe and Anchor (EGA)… on it.  Other than that, it’s the exact same thing, it just costs 30% more because of the branding process.  For real, when it comes to the EGA, the Marines go all “Franks Red Hot Sauce” on all the things,” he added, referring to the hot sauce manufacturer’s motto: “I put that sh*t on everything.”

Because new Velcro kicks are unlikely to fix the “lower extremity injury” problem entirely, recruits will now be issued a “no PT” profile until they get to their first duty station.  But hey, at least with these new boots the Navy will now be able to tell which of their sailors is wearing white socks, without the intervention of the Iranians.

The men and women who enlist in our armed services are, for the most part, actually quite intelligent and we salute them for their service to our nation.  But at the end of the day, even privates who can’t tie their own shoes are still smarter than people who think articles like this are real.