WASHINGTON D.C. – According to a recently published article in Bloomberg: “The U.S. military may have finally found a way to fix a glitch with the world’s most high-tech helmet used by pilots flying the most expensive fighter jet in history. A bug in the $400,000 helmet display screen used by F-35 aviators caused a green glow when flying in very low-light conditions and is now expected to be overcome by using a different type of semiconductor illumination. The distracting green glow was deemed so critical that restrictions were imposed on some night landings on aircraft carriers, and the fault was classified as a “Priority One” fix by the Pentagon’s test office. Jittery lines were also visible to some pilots.”

Article 107 News obtained exclusive information from an anonymous source which shed light on the truth of what actually occurred. The real story makes much more sense.

A number of years ago the DoD began going Green across many organizations. This then filtered down to suppliers and contractors which, in the case of the helmet, was Rockwell Collins.

In this case the term “bug” is much more accurate than “semiconductor.” Apparently the design engineer in charge of the illumination system took the Green concept a little too far. It didn’t help that she was an avid Child of Mother Earth and decided that nature could provide better illumination than an artificial semiconductor produced with all sorts of toxic chemicals and metals. So she spent months looking for alternative natural sources, but each one that seemed promising eventually failed.

Her breakthrough moment happened on her drive home one early summer evening when a hapless lightning bug (firefly) went kamikaze on her windshield. She noticed that even though the bug was deceased its glow continued to emit light. The fact that the aircraft was also called “Lightning” added karma to the event.

Due to a number of pencil-whipped technical reviews, lightning bug abdomens were harvested and incorporated into the helmet illumination displays. The rest is story was covered by Bloomberg. since our readers are smart and can easily deduce how the events played out. But the jittery lines baffled investigators until they figured out that it only happened when female lightning bugs were in the area.

In a coordinated damage control effort and in an attempt to not admit to any blame, the engineer in question was promoted to Senior Vice-President of Military Sales.

Art107 News sources further report that the F-35 JPO and Lockheed Martin are trying to quickly replace all the defective illumination displays, however efforts have stalled due to a injunction filed by PETA who have voiced concerns that the insect remains should be handled humanely. 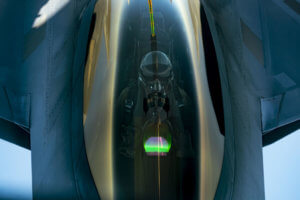