HomeMilitaryArmy to Award “The Gay is OK” Ribbon To Entire Force 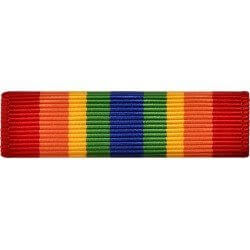 Editor’s Note:  This article first appeared on The Shadowblog and was re-posted here January 26, 2016 with the permission of the original author.

WASHINGTON D.C. – In an effort to undo the negative influence of more than 100 years of bigotry, harassment, intimidation, and fear of homosexuals in its ranks, the Army announced yesterday that every Soldier will be issued, and required to wear, the new Personnel Ribbon in Diversity Experience, known more colloquially as “The Gay is OK” ribbon.  Modeled after a well-known image of tolerance and diversity, the rainbow-hued PRIDE ribbon reflects an evolution in Army diversity, according to Chip Ringgold, the Army’s new LGBTQ Promotion and Integration Coordinator.

Awarded after successfully completing mandatory “sexual orientation and re-orientation” training in basic training, the ribbon demonstrates “a clear commitment to righting past wrongs, preserving present power, and ensuring the future legitimacy” of the lesbian, gay, bisexual, transsexual, and queer community within the Army, said Ringgold during an interview in his Pentagon office.

Sergeant Major of the Army Raymond Chandler confirmed that in addition to banning tattoos and the use of profanity while in uniform, the newest update to the Army’s uniform guidelines, Army Regulation (AR) 670-1, will reflect that this ribbon as the Army’s only “required” award, which all Soldiers will wear in the place of honor, centered on the bottom row of their awards and decorations.

“This whole Don’t Ask Don’t Tell repeal thing was a non-issue for us, because we came to terms with gays in our ranks sometime around… October 2001, when we decided we had more important things to worry about, like stopping AQ from blowing the shit out of our country again.  People think that because most of the Army’s enlisted members come from the rural South, and that we’re predominantly Christian, that somehow we can’t work with our comrades who are gay.  Listen, I worked with the Afghan National Army for eight months, trust me, at this point I can work with ANYONE.  If they can do the job, let them serve.”

Other Soldiers agreed.  “I’m not gay, I don’t want to be gay, I think I have a grand total of maybe two gay friends.  My religious beliefs are important to me, and they say homosexuality is a sin.  But so are a lot of other things that go on in Army units and on the battlefield,” said Specialist Demetria Young.  I don’t like (homosexuality), it’s not for me, but that doesn’t make it incompatible with military service.  As long as there are not special privileges that the Army’s LGBTQ community gets that the rest of us in uniform don’t, I don’t think you’re going to see any kind of major backlash.”

While tolerant of homosexuality and other alternative lifestyles, some Soldiers question why the Army is suddenly giving out an award for basically just being a decent human being.  “Now they want to give us a ribbon for not being assholes to our brothers and sisters in uniform simply because they have a different sexual orientation,” said First Lieutenant Arnold Sheppard.  “It’s stupid and insulting to give us decorations for doing things we should be doing anyway.  That would be like giving every enlisted Soldier a medal every three years for not getting kicked out of the Army for a disciplinary issue… although now that I think about it, we do that too.”

The Army intends to use part of the cost savings derived from the Ryan-Murray military pension reduction plan to offset the expense of establishing and distributing the new PRIDE ribbon throughout the force, which is estimated to be $15 each for Army’s 1.9 million Soldiers.

Yes, we know that the image shown is actually the Army Service Ribbon; the person who wrote this article is in the Army. Additionally, the author isn’t gay, or a “gay ally” or even a liberal.  He’s just someone who thinks it’s ridiculous that “the gays” is still an issue.