HomeMilitaryArlington Guards Forced To Protect Themselves against “Cup Checks” 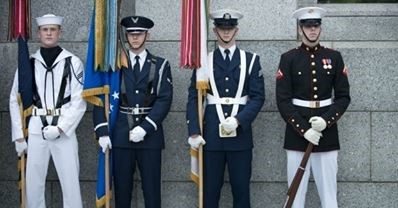 WASHINGTON, D.C. – Forget the “knockout game,” restless urban youths are playing a far more heinous game these days:  the “cup check.” Similar to the knockout game, where teenagers randomly assault passersby and try to render them unconscious with a single blow, the cup check can similarly cause severe pain, loss of consciousness, and in some cases, permanent physical damage or even death. The difference is the part of the body to which the blow is delivered. In the knockout game, the blow is usually administered to the jaw or the brachial artery. In the cup check, the blow lands a little further south.

The practice seems to have expanded from the high school football field to a world-wide phenomenon. One local athlete explained: “You were supposed to wear your (athletic supporter) cup every day at practice. But a lot of guys didn’t, because it was uncomfortable or whatever. So to teach the guys a lesson, coach would give a little shot to the groin every now and then when he waked past during practice. If you had your cup in, no drama, you wouldn’t hardly even notice it. But if you didn’t…well, let’s just say that you never forgot your cup again.”

Members of Arlington Cemetery’s elite Joint Color Guard have had to take measures to protect themselves from “cup checks” administered by roving gangs of feral urban D.C. youths. “The color guard has to remain completely still at all times, and cannot react to any outside stimulation,” explained Sergeant First Class Edmund Fitzgerald of the 11th Infantry “Old Guard.” “And the kids in the community, they know this. So they’ll walk up to the Color Guard and give them a shot in the nuts. The guys on the Color Guard know it’s coming, but they can’t do anything about it, other than pray they don’t pass out. Yeah, it sounds funny, unless you’re the one getting hit.”

To counter this disturbing new trend, the Marine Corps took the unusual step of issuing rifles and live ammunition instead of the venerated Marine Corps flag to Marines on the color guard detail. “I told my Marines to leave that flag in the barracks and start bringing your rifle instead. And if any of those little bastards even LOOKS like he’s thinking about hitting you in the nuts, you shoot him in the face,” said GEN (ret.) “Mad Dog” Mattis.  “Or bayonet him, that’s cool too.”

Less extreme measures were considered by the other services but were ultimately rejected. A suggestion to actually wear a cup was disapproved by Army brass. “Much like tattoos, athletic supporters are not an authorized accouterment of the military uniform, so they cannot be worn, even if they can’t be seen from outside the uniform,” Sergeant Major of the Army Michael A. Grinston said in a press conference held this afternoon in the Pentagon.

“Service members who feel like their genitals are in jeopardy may, at the discretion of the commander, place one hand in front of their groin area to deflect blows aimed at their penis and/or testes,” said an order recently made public. “The other hand must remain free to salute officers.” At press time, the Army, Navy, and Air Force had adopted this new policy. The Marine still had his rifle. There have been zero reports of “cup checks” against the Joint Color Guard since the new guidance went into effect.

Editor’s Note: This article first appeared on The Shadowblog and is re-posted here with the permission of the original author.

Nobody’s special little snowflake is going to get bayoneted for disrespecting Arlington Cemetery’s Honor Guards. But perhaps they should…